Abandon picks! Abandon picks! This is your Captain speaking. My NFL conference championship picks will sink you. I am currently in a massage parlor on dry land.

I am talking to you by speakerphone after ditching the boat as soon as I saw the Cleveland Browns season go under water. In other words, I haven’t been on the ship since about October. I told Rob Lowe to let you know. Truthfully, I am surprised it took this long to sink. 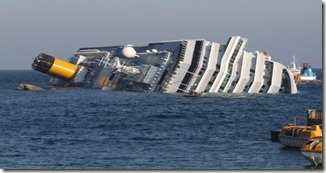 As you may have heard, the USS Whatzgonnahappen – a GOP charter – was built out of toothpicks and Elmer’s glue. Ron Paul was in charge of the budget, Mitt Romney fired the staff, Newt Gingrich hired 9-year-olds to replace the staff, and Rick Santorum dressed everyone in these nifty sweater vests.

The Green Bay Packers and Tim Tebow were key parts of the navigation system of this ship. You should have jumped off when those two pieces inexplicably shattered last weekend. Please follow along here because I am making up an excuse while I hear the police knocking at the door of this massage parlor on dry land that I am currently enjoying while you are on a sinking ship.

The truth is that this GOP charter ran into a rock I call Juan Williams, and it was exposed as an empty vessel. This is very much like how every Cleveland Browns season runs into a rock called The Schedule. Thank you again for choosing the USS Whatzgonnahappen.

RAVENS AT PATRIOTS – After last week’s game against Denver Community College, the New England Patriots play host to the soulless Baltimore Ravens, featuring smoking Joe Flacco. He’s either hot or he flames out. The Patriots defense should give the Ravens hope. If Flacco gets confidence, he could make this a game. But if the Ravens defense doesn’t hit Tom Brady early and often, the Patriots offense could explode in a pick-your-poison offense – Gronkowski, Welker, and Hernandez. Only one Harbaugh is allowed to win this weekend, and it won’t be the one playing chess with the Hoodie. Wild thought of the game: I think Chad Ocho Cinco makes a key play. Ray Lewis goes on a cruise. Patriots 33, Ravens 20

GIANTS AT 49ers – This should be a good game, but it’s not like it’s the Packers versus the Saints. That would have been a good game, huh? In fact, the two best NFC teams are in this game as the NFL playoffs prove once again that it’s not about how cumulatively good you were, but how good you are right now. And right now, it’s easy to make a case for either one of these teams. The Giants defense was overwhelming last week and the offense is loaded with weapons and a great quarterback. However, Alex Smith grew into his potential last week. He looked special at the end of the game and I am all-in on the Cinderella story. 49ers 24, Giants 20

BYE AT BROWNS – Mike Holmgren sends a letter to all his players in a Dan Gilbert Comic Sans font explaining how the Browns will win next year’s Super Bowls just as sure as this year’s Cavaliers will shock the Miami Heat in the first round of this year’s NBA playoffs.

This column is sponsored by the first name, “Willard,” as in Willard Mitt Romney.