Legal Brief: The turkey is innocent of all charges, but pleads guilty and offers these Week 12 NFL picks in lieu of the traditional fine of one delicious meal.

The turkey is appealing for an emergency injunction on the grounds that the turkey has inside information about the Packers-Lions game. Ndamukong Suh is hungry.

Also, attorneys for the turkey argue that the turkey did not do the crime. In fact, the crime has been perpetrated by an elephant and a donkey mixed with alcohol, but somehow the turkey got blamed. The turkey believes it is unreasonable to do the same thing every year. The turkey calls for a United Nations investigation into systematic genocide of his ethnic group. 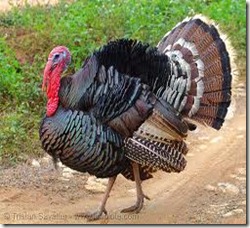 The turkey requests that the government refrain from pepper-spraying the turkey while the appeals process is underway, and in return the turkey will provide information about Dolphins quarterback Matt Moore. Matt Moore is almost good enough to be called mediocre. For this information, the turkey specifically requests it not be plucked or basted.

The turkey admits the following facts:

1) the turkey is a Cleveland Browns fan
2) the turkey can bark like a dog
3) the turkey camped out in a public park with a Browns flag and a sign that said, “Occupy Last Place.”

The turkey believes its protest against the government does not serve as grounds for the government to impose a draconian punishment to the turkey. The turkey demands the right to free speech, the same as any American. The turkey requests that the Cleveland Browns win two games in a row, but the turkey admits that might be an unfair request.

The turkey is begging for leniency, pleading insanity, and offering to testify against the elephant and donkey. In conclusion, the turkey offers these Week 12 NFL picks.

PACKERS AT LIONS – The Packers aren’t winning every game this year. The Lions will show the NFL something on Thanksgiving. The Packers are a better team, but not this turkey day. Aaron Rodgers is human when pressured. Lions 37, Packers 27

49eRS AT RAVENS – Two brothers coaching against each other means a vase gets broken and the upholstery on the sofa gets ripped. Those kids! Jim was a better player, therefore he’s a better coach. Meanwhile, Ray Lewis overdoses on tryptophan. 49ers 20, Ravens 17

TEXANS AT JAGUARS – Matt Leinart versus Blaine Gabbart is a matchup that no one will be fondly recalling years from now. Texans 12, Jaguars 9

BROWNS AT BENGALS – For half the season Colt McCoy liked like a career backup with  wobbly, inaccurate passes, and then last week he looked almost like Drew Brees. In my Shangri-La, McCoy is a great quarterback and Andy Dalton is not. Browns 28, Bengals 21

VIKINGS AT FALCONS – The Vikings are going nowhere and the Falcons help them get there. Falcons 32, Vikings 14

BILLS AT JETS – At Thanksgiving dinner, Rex Ryan flips the bird, but the Bills are turkeys without Fred Jackson. Jets 20, Bills 12

BUCCANEERS AT TITANS – LeGarrette Blount is the brand name of a bulldozer. Buccaneers 23, Titans 20

CARDINALS AT RAMS – Tough to pick between Sam Bradford and John Skelton, and that says more about Bradford than it does about Skelton. Rams 14, Cardinals 9

REDSKINS AT SEAHAWKS – The Redskins can usually find a way to lose. Rex Grossman helps the cause, as will Marshawn Lynch. Seahawks 20, Redskins 17

BRONCOS AT CHARGERS – What do you call someone who prays for Tim Tebow to lose? Broncos 17, Chargers 14

PATRIOTS AT EAGLES – The Patriots are way more than a mirage but a little less than the real thing. The Eagles are a nightmare. Patriots 30, Eagles 19

This column is sponsored by gravy.