When James Harrison and Brandon Meriweather suggested that I not make these Week 7 NFL picks because I have the mental capacity of a green pepper, I scoffed. 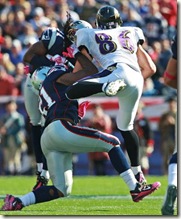 But that doesn’t mean I can’t get right back out here and keep predicting the Cleveland Browns are about to go on a winning streak that leads them to the Super Bowl. Brain damage? I don’t have a clue what you are talking about. But I am told this is whatzgonnahappen.

JAGUARS AT CHIEFS – Maurice Jones-Drew plays quarterback, the Jaguars run the Wishbone Offense, and Jack Del Rio wears a Bear Bryant hat. But the good news is that the Jaguars are already halfway to Los Angeles. Chiefs 37, Jaguars 13

BENGALS AT FALCONS – While Matt Ryan claws his way towards the top echelon of NFL quarterbacks, Carson Palmer has a cliff named after him. Falcons 24, Bengals 21

BYE AT LIONS – Calvin Johnson orders a cheeseburger and pays for it, but then the drive through window closes. That’s the rules.

BROWNS AT SAINTS – Colt McCoy shows Drew Brees how to play quarterback, and then he begins composing his Hall Of Fame speech. Browns 24, Saints 13

BILLS AT RAVENS – The United Nations should be called in to stop this one. Ray Lewis is accosted by someone wearing a Ray Lewis Halloween costume. There are no witnesses willing to testify. Ravens

BYE AT COLTS – Peyton Manning throws two touchdowns while sitting on his couch.

REDSKINS AT BEARS – Jay Cutler begs to wear a uniform without a target on it. Redskins 22, Bears 17

STEELERS AT DOLPHINS – When Ricky Williams nears the goal line, James Harrison lays down a red carpet and tosses flowers in the air. The commissioner is pleased. Dolphins 26, Steelers 25

BYE AT JETS – Rex Ryan’s ego is being prepared as a float in the Macy’s Thanksgiving Parade.

RAIDERS AT BRONCOS – Jason Campbell is the Raiders quarterback, and Bill Belicheck owns the Raider’s first round pick. Broncos 30, Raiders 17

PATRIOTS AT CHARGERS – The Chargers are a desperate team with a great quarterback, and the Patriots are traveling across country. They’ll notice this week that they traveled without Randy Moss. Chargers 25, Patriots 21

BYE AT TEXANS – The Texans practice on a teeter totter.

GIANTS AT COWBOYS – The Yankees lost to the Rangers. I’ll stay with the trend. Cowboys 17, Giants 14

The column is sponsored by a broken computer.