The Mayans’ week 17 NFL picks, at the cusp of the year 2012, signal the end of the world. Or maybe the end of the NFL season. As if there is a difference.

As a Browns fan, the end of the season usually happens at the beginning of the season. It would be tough for me to know if the world ended or not, since my head has been buried under the sand for weeks. I always thought the world officially ends on the day you die, but decades of cheering for the Cleveland Browns has led me to believe that perhaps hell is right here on Earth. The Mayans make me angry. 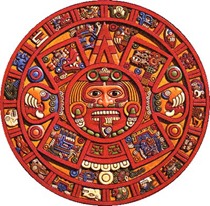 It has all gone just as the Mayans predicted.

Newly uncovered evidence suggests that the Mayans have, in fact, predicted every NFL game in history correctly. These are the last of the Mayan NFL predictions on account of that end-of-the-world thing, Predicting next season would be useless, wrote the Mayans.

The Mayans were Cleveland Browns fans, of course, which means they hated and still hate the Pittsburgh Steelers. But they couldn’t help the future they saw – including scary things like how Iowa will make us all think it’s a Rick Santorum world, and we just live in it.

While Tebow versus Orton took up a significant amount of stone-carved text, in the end the Mayans were split on Tebow. Otherwise, the Mayans clearly predicted this is whatzgonnahappen.

LIONS AT PACKERS – The Lions need the game and the Packers most likely give Aaron Rodgers a lot of rest, but this game will still be fun and somehow mean something. Packers 29, Lions 27

TITANS AT TEXANS – The Oilers had more character than both of these teams combined. I hated the Oilers. Texans 23, Titans 17

JETS AT DOLPHINS – Matt Moore is better than Mark Sanchez at this moment in time. The Dolphins karma is on the upswing. The Jets? Rex Ryan talks, karma listens. Dolphins 20, Jets 14

BEARS AT VIKINGS – I don’t care versus me neither. Some rivalry. Bears 21, Vikings 20

BILLS AT PATRIOTS – The Bills wonder what happened to the good Bills team from earlier in the season. The Patriots are full speed ahead in the first half. Patriots 31, Bills 20

REDSKINS AT EAGLES – I am going to miss the dream team. This is their best game. Eagles 33, Redskins 23

49ers AT RAMS – The Rams cannot do much against the 49ers defense and each team has the persona of their coach. In the Rams case, it is of Steve Spagnulo walking a plank. 49Ers 29, Rams 13

BUCCANEERS AT FALCONS – Raheem Morris is in line with Steve Spagnulo. The Falcons need a win going into the playoffs. Falcons 30, Buccaneers 15

RAVENS AT BENGALS – The soulless Ravens against the dumb Bengals and it actually means something to both teams. Is this an alternate universe? The New Year’s ball in Manhattan rolls to and then over Ray Lewis. Freak accident. Bengals 29, Ravens 27

STEELERS AT BROWNS – First play from scrimmage: the Browns throw a successful bomb. Yes, this is fantasy and the evil Steelers are too intimidated by the Browns to even agree to go to the playoffs. Yes, it’s hard to believe the Browns would throw a bomb. Browns 9, Steelers 6

SEAHAWKS AT CARDINALS – John Skelton has a great NFL name, so I have to root for him in a game in which two mediocre teams are suddenly play okay or even alright. Cardinals 20, Seahawks 16

CHIEFS AT BRONCOS – The Chiefs will be more inspired by Romeo Crennell and Kyle Orton’s accurate passes than the Broncos will be by Tim Tebow running around hoping for something good to happen. Chiefs 20, Broncos 17

CHARGERS AT RAIDERS – With the Broncos losing, Carson Palmer throws a game-winning touchdown pass to get the Raiders in the playoffs and get Al Davis’ ghost to smile. There’s got to be a ghost, right? Raiders 30, Chargers 26

This column is sponsored by Santorum World, an amusement park.