What a field day for the heat
A thousand people in the street
Singing songs and carrying signs
Mostly say, hooray for our side
– Buffalo Springfield 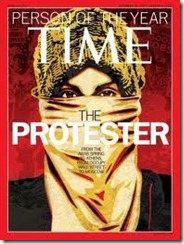 Me and my kind have taken down Hosni Mubarak, Moammar Khadafy, and Tony Sparano. We  have taken on the world’s biggest banks, Vladimir Putin and Mike Holmgren. We are causing regime change in some places, while others are changing policies as a result of protests.

As the year 2011 comes to a close, The Protester has one final, radical goal: Fix the Cleveland Browns. Yes, regime change in Egypt was easy by comparison. But The Protester does not give up. Power to the people! Oh yeah, that’s whatzgonnahappen

COWBOYS AT BUCCANEERS – Saturday was a long time ago.

TITANS AT COLTS – Nobody’s perfect this season except the Packers. Colts 13, Titans 10

PACKERS AT CHIEFS – I like Romeo Crennell, and Kyle Orton poses a bit of an early issue, but the Packers offense is dominant. Packers 24, Chiefs 17

DOLPHINS AT BILLS – Buffalo weather so I am back on the bandwagon. Plus the Dolphins are waiting for next year. Bills 20, Dolphins 19

SAINTS AT VIKINGS – Drew Brees is the definition of accurate. Saints 38, Vikings 24

REDSKINS AT GIANTS – Eli is better when Peyton is not in the league. Giants 27, Redskins 20.

PATRIOTS AT BRONCOS – The Patriots should win 42-0. They won’t win because Tim Tebow inspires the Broncos defense to rush Tom Brady who throws an interception to an unnamed player who Tim Tebow cheers for as the player runs for a touchdown. Tebow cheering is the ESPN play of the week. Broncos 24, Patriots 21

RAVENS AT CHARGERS – The Chargers are back? Back to nowhere, says I. The soulless Ravens remind Philip Rivers he is having a miserable season. Meanwhile, Ray Lewis has a fatal tinsel accident. Ravens 24, Chargers 21

STEELERS AT 49ers – The evil Steelers are better than the 49ers if Ben Roethlisberger plays. Steelers 17, 49ers 13

This column is sponsored by “The Gingrich Who Stole Christmas,” and “I Saw Romney Kissing Santa Claus.”