And lightening strikes, maybe once, maybe twice
Oh, and it lights up your night
And you see your gypsy

Hi, my name is Randy and I am the new temp here doing Week 5 NFL Picks. I used to work in New England but that job, like your job, was eliminated.

So with 9.6 percent unemployment, I took what I could get. I now understand the plight of the average American. And I know what’s really important. I am making

approximately $6.4 million less than I used to, but the boss here said he appreciates me. And that’s really 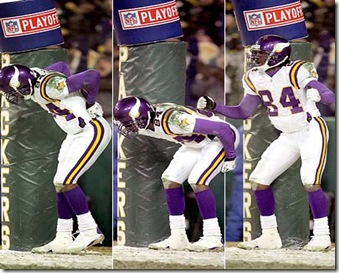 what it’s all about – respect.

I am not sure how long I am going to stay. After all, I am a temp. Since this is where the temp agency sent me, all I can do is promise to do my best. I have worked in Minnesota, Oakland, and New England, and I promise that I will give as much effort here as I did in Oakland

So I am going to have to make this quick because, get this, apparently the temp agency is transferring me again – this time to Minnesota. Apparently their other client, Brett Favre, recommended me. Yeah, that’s whatzgonnahappen.

BRONCOS AT RAVENS – While Laurence Maroney tiptoes through the tulips for about a yard per carry, Kyle Orton learns how hard it is to throw with Ray Lewis in his face. Ray Lewis comes down with acute in-your-face disease. Ravens 23, Broncos 16

BYE AT DOLPHINS – Hey Bill Parcells, is there a reason you walked away when you did? Did you already know that we’d see what we’re seeing?

BUCCANEERS AT BENGALS – Hoping-to-be-mediocre versus Expecting-to-be-better-than-average. Although the Bengals are not better than average, they will look so this weekend. Bengals 27, Buccaneers 17

FALCONS AT BROWNS – The Browns secondary, not to be confused with toast, graciously gives Roddy White two early touchdowns. But Peyton Hillis is relentless and unstoppable, and by the second half Jake Dehomme throws actual touchdown passes. Browns 35, Falcons 20

RAMS AT LIONS – Lots of Stephen Jackson will set the tone, but I suggest this is a Sam Bradford rookie mistake game. Lions 24, Rams 16

CHIEFS AT COLTS – Romeo Crennel’s young defense flusters Peyton Manning at a few key moments because every season needs a story like the Chiefs. Chiefs 24, Colts 23

PACKERS AT REDSKINS – Donovan McNabb continues to play well, but Aaron Rodgers gets back to playing great. Packers 38, Redskins 28

BYE AT SEAHAWKS – Pete Carroll spends the off-week on his second job as a runner for NFL agents on the USC campus.

SAINTS AT CARDINALS – The Saints look very average and are not going to win the Super Bowl again, but they should be able to beat an undrafted rookie quarterback in his first start. Saints 27, Cardinals 20

TITANS AT COWBOYS – The Cowboys are a team built for October. Cowboys 31, Titans 13

BYE AT PATRIOTS – The Patriots trade two fans who own Randy Moss jerseys to the Raiders for a second round pick.

EAGLES AT 49ers – A blowout followed by a Mike Singletary press conference. It’s a great plot for a sitcom. Eagles 32, 49ers 17

This column is sponsored by the Nobel Pizza Prize.