You’ve got to change your evil ways, baby
Before I stop loving you
– Santana

Week 10 NFL Picks for Bullies is the first of a new series of reference books to compete with the For Dummies books, and with the Complete Idiot’s Guides.

Are you a dick? These Week 10 NFL Picks For Bullies are for you. 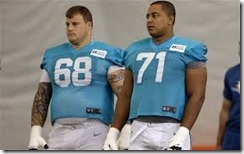 Is a bag of hammers smarter than you? This is the place for guidance.

Until this week, being a bully in the NFL was a good thing. So just say that, and then stop talking.

And please, no more text messages. Even we’re offended, and our next book is called Pre-Teen Mean Girls For Bullies.

One more thing. You need to come forward now.

It’s too late to go incognito.

It may not look good right now, but this is America. Nice guys finish last. Bullies always win. So just ride this out, because that’s whatzgonnahappen.

BENGALS AT RAVENS – Joe Flacco received a $29 million signing bonus and he is playing like you would if someone gave you $29 million. Yes, you. Bengals 23, Ravens 13

EAGLES AT PACKERS – On one side, Nick Foles is already a first-ballot Hall of Famer. On the other, Seneca Wallace is not as good as Aaron Rodgers. Or Mr. Rogers. Eagles 27, Packers 10

SEAHAWKS AT FALCONS – The Falcons are mostly horrible. The Seahawks are mostly opportunists. This is an opportunity, but I mostly sense an upset.  Falcons 24, Seahawks 23

JAGUARS AT TITANS – The Titans bring in a Pop Warner team to practice against in order to prepare for the Jaguars. Titans 36, Jaguars 13

BILLS AT STEELERS – The Steelers have a hard time remembering how not to give up touchdowns but they seem to figure it out by halftime. Steelers 26, Bills 21

PANTHERS AT 49ers – The Panthers are playing great football. And I think I like Cam Newton more than Colin Kaepernick. But I reserve the right to change my mind. Panthers 20, 49ers 19

BRONCOS AT CHARGERS – Jack Del Rio is not nearly as good as John Fox at saying, “Okay Peyton, you call the plays.” Chargers 34, Broncos 31

COWBOYS AT SAINTS – Tony Oh No! plays really well for three quarters, as he is apt to do. But in the end, he makes Rob Ryan feel good about himself. “Better than donuts,” says Ryan. Saints 33, Cowboys 29

BYE AT CHIEFS – The opponent this week is equal to many of the Chiefs opponents this season. I’m picking the Chiefs.

BYE AT JETS – Rex Ryan looks at his phone. Another text message from Mark Sanchez.

BYE AT PATRIOTS – Tom Brady hangs out with Gisele and rests his hand. Wouldn’t you?

BYE AT BROWNS – Brandon Weeden has a strong case that that whenever he plays, the defense bullies him.

This column is sponsored by NFL Coaches for ObamaCare, or at least a stretcher.