These week 11 NFL picks are having an affair with my biographer. I am writing an autobiography.

My autobiography begins when these week 11 NFL picks were found in General David Petraeus’ underwear by the FBI, acting on a tip from an unnamed New York Jet. 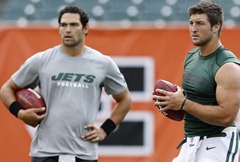 This week’s NFL picks are the next act in a bad soap opera script involving Tim Tebow, Mark Sanchez, Rex Ryan and the New York Jets. It’s actually a soap opera taking place on a train wreck. Sort of like a bombastic Titanic on land. So much bad romance. So much tragedy, and navel gazing. It’s the NFL written by Woody Allen, and directed by Irwin Allen.

Meanwhile, in other soap opera news related to these week 11 NFL picks, General Petraeus resigned, and Michael Vick has taken a bell-ringing break from the inner sanctums of It’s Never Sunny In The Philadelphia Eagles Locker Room.

Affairs and broken relationships are rampant across the NFL at this time of year, and there are plenty of conspiracy theories, according to my biographer. Norv Turner owns very valuable photographs. Jerry Jones takes advice from martians. Roger Goodell does not have a soul. For some fans, just like for some voters, it’s maddening.

Like many disgruntled citizens after the election, I understand the desire to secede. After the first half of the NFL season, I believe the Cleveland Browns should secede from the NFL. I do not understand why my predicted record for the Cleveland Browns of 9-0 by this point is only 2-7. My internal polling showed for sure they would win every game.

Someone has cheated. Teams have grown to expect wins just because they score more points than the Cleveland Browns. If that’s the kind of NFL we live in, just forget it. It means we have more takers of wins, than makers of Browns wins. I don’t know if it’s hopeless, but it’s troublesome.

After Petraeus, our best known general since Norman Schwarzkopf, became a spy and started running around like an American James Bond, these week 11 NFL picks became shaken, not stirred. Thus, a loud anonymous voice from the New York Jets locker room brought attention to the fact that these picks exist and some people say that, despite some very loud and public prayers, they are horrible.

It makes you wonder, now whatzgonnahappen.

DOLPHINS AT BILLS – Fitzpatrick is currently the better Ryan. I thought the score would be higher, but even I could have predicted a Ryan Tannehill interception to lose the game. Bills 19, Dolphins 14

BUCCANEERS AT PANTHERS – Since October 1, the Buccaneers are averaging 36 points a game. Numbers do lie, but not this week. Buccaneers 36, Panthers 26

BROWNS AT COWBOYS – The Browns are excruciatingly close to breaking through. I worry the uncertain drama of the new owner could hurt this year’s karma. But the dysfunctional Cowboys are Jets Lite. Browns 24, Cowboys 21

PACKERS AT LIONS – I’ve lost all faith in the Lions and I’ve gained a lot of faith back in the Packers. Packers 37, Lions 24

CARDINALS AT FALCONS – This is as if an actual falcon fought an actual cardinal. Falcons 39, Cardinals 19

BENGALS AT CHIEFS – The Bengals are unreliable. The Chiefs can beat them if they don’t beat themselves. Chiefs 17, Bengals 14

JETS AT RAMS – After his fifth interception of the day, Mark Sanchez smiles and says, “I’m the starting quarterback. The team has no other choice.” Rams 24, Jets 13

BYE AT TITANS – On average, Chris Johnson has a good week.

SAINTS AT RAIDERS – The Saints are on a roll and the Raiders stink. Classic trap game for a team with no defense. Raiders 30, Saints 28

CHARGERS AT BRONCOS – Norv Turner designs plays for Philip Rivers to throw to both cornerbacks, both safeties and any time a backup linebacker appears. Broncos 31, Chargers 20

COLTS AT PATRIOTS – How real is Andrew Luck? He marches into Foxboro and beats Tom Brady and Bill Belichick. For real. Actually, it’s the Patriots defense that is really bad. Colts 33, Patriots 30

RAVENS AT STEELERS – Ben Roethlisberger, frightened by his injury, begins his memoir, “My Best Pickup Lines.” Ray Lewis calls the cable company and is put on infinite hold.
Ravens 27, Steelers 13

This column is sponsored by the Breakfast Burrito Foundation