Trouble ahead, trouble behind
And you know that notion
Just crossed my mind
– The Grateful Dead 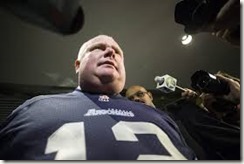 Do you got any crack?

I’ve been running around in a football jersey talking about oral sex and cocaine, but only because I want to get elected again. You may have noticed that my popularity has surged ever since I’ve been labeled a crack-smoking mayor. Hell, I might just murder somebody to see how far I can take this.

After all, the Cleveland Browns are playing the Pittsburgh Steelers this week, so I am feeling extra feisty. And Tom Brady is facing off against Peyton Manning too,which makes me want to ask you, do you have any crack?

Okay, actually I deny ever using crack. Sure, there is video of me smoking it after a game Brandon Weeden started for the Browns. While you certainly couldn’t blame me if I did smoke crack after watching Weeden play, look at me. I weigh 5.000 pounds. That wasn’t crack I was smoking. What we have here is a spelling error. I was smoking cake. And pie. And bacon.

So put that in your pipe and smoke it. But first, pass it over here and then I’ll tell you whatzgonnahappen.

SAINTS AT FALCONS – I have a strong feeling on this game. Saints 17, Falcons 13

JETS AT RAVENS – I learned how patterns work in grade school. The Jets win every other week. This week, they win. Jets 20, Ravens 17

BUCCANEERS AT LIONS – Mike Glennon is playing over his head, which is tough because he’s so tall. Lions 31, Buccaneers 20

VIKINGS AT PACKERS – Scott Tolzien’s mom and I both believe in him, mostly because neither one of us believe in the Vikings. Packers 29, Vikings 13

PANTHERS AT DOLPHINS – Every pattern of this game says the Panthers will beat the Dolphins. Sometimes, I ignore patterns and simply remember that Cam Newton is still capable of an occasional  crappy game. Dolphins 23, Panthers 13

COLTS AT CARDINALS – Trench Richardson is still trying his best to help the Cleveland Browns by trying to improve the draft position. It’s Andrew Luck and Donald Brown who keep messing it up for Richardson. Colts 27, Cardinals 21

TITANS AT RAIDERS – Matt McGloin will someday tell his grandchildren that he played for the Oakland Raiders. At which point, they will never talk to him again. Titans 20, Raiders 12

COWBOYS AT GIANTS – This game is sponsored by the National Association of psychiatrists. Giants 39, Cowboys 38

49ers AT REDSKINS – Kaepernick versus Griffin. One year ago, it sounded like a future Brady versus Manning long-term rivalry. Now? See Clemens versus McCown above. 49Ers 19, Redskins 16

BYE AT BILLS  – John Bon Jovi is interested in buying the Buffalo Bills? Why not? They’ve been living on a prayer for a long time.

BYE AT EAGLES  – Chip Kelly tries to see if the Eagles will qualify for the BCS.

This column is sponsored by the Iranian Tourist Council.