I may be going to hell in a bucket, babe
But at least I’m enjoying the ride!
– The Grateful Dead

These week 13 NFL picks say it’s time to get rid of the Reggie Bush tax cuts. I’ve never understood why he’s the only guy in the country that needs help.

Yes, these Brady Quinn-jersey-wearing week 13 NFL picks by Senators Thelma and Louise, the Philadelphia Eagles, and Fireman Ed,  are barreling off of a cliff. Let us pray… for the Cleveland Browns and America, in that order. 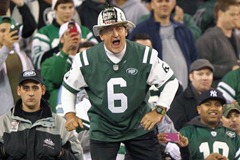 Okay, praying never works for the Cleveland Browns. I’ve tried. He laughed at me.

But as a supporter of Cleveland Browns entitlement programs such as the recent eight-turnover win over a Pittsburgh Steelers team quarterbacked by a 37-year-old third string quarterback, I would hate to see the government go back to a time when the Cleveland Browns are expected to compete on a level playing field. Those days have long passed.

I believe in the welfare state. It helps the destitute, those who cannot help themselves. The proof is that last week it helped the Cleveland Browns. FDR was right, Reagan was wrong, and Art Modell was Football Satan or it might be the other way around.

A long time ago, the Cleveland Browns were run by Paul Brown and the rich ran the world as they should. Then Art Modell bought the team, fired Paul Brown, and pretty much ever since the rich have run the world as they shouldn’t. If you are smart enough to connect all the dots, everything in life is related to the fate of the team in orange helmets.

But I think when the Browns win the rest of their games and get in the playoffs and win the Super Bowl, all of this cliff jumping will be avoided. So that’s whatzgonnahappen.

TEXANS AT TITANS – The Texans are coming off of a long rest, and the Titans are extremely mediocre. This is not any given Sunday, it’s this Sunday. Texans 32, Titans 10

COLTS AT LIONS – The Colts are chasing a playoff berth and the Lions are out, proving the NFL is unpredictable. Anyone who even tries to predict is an idiot. Colts 31, Lions 21

SEAHAWKS AT BEARS – Bears eat Seahawks for breakfast. I saw it on the nature channel. Bears 23, Seahawks 13

VIKINGS AT PACKERS – I don’t understand either one of these teams, so I certainly can’t understand how Minnesota goes into Green Bay and wins, but they do. Vikings 27, Packers 20

PATRIOTS AT DOLPHINS – The Patriots have scored 108 points in the last two weeks, so expect another average Patriots win. Patriots 54, Dolphins 20

CARDINALS AT JETS – Now that Fireman Ed has left, Tim Tebow finally has a place with the Jets… in the stands. Jets 20, Cardinals 17

BUCCANEERS AT BRONCOS – I am always the last to notice things, but I think Peyton Manning is back. Broncos 42, Buccaneers 30

BROWNS AT RAIDERS – Jon Gruden moves to Lyndhurst and coaches Brush High, and therefore gets an ownership stake in the Browns. Browns 45, Raiders 21

BENGALS AT CHARGERS – It’s so bad in San Diego that at the end of the game, Norv Turner’s face finally melts like the Nazi in Raiders of the Lost Ark. Bengals 31, Chargers 21

STEELERS AT RAVENS – Two weeks ago, Charlie Batch was taking dementia drugs in a retirement home. Ray Lewis early comeback is so inspirational that he decides to become a missionary, and that’s how he was captured and killed by pygmies. Ravens 24, Steelers 13

EAGLES AT COWBOYS – The cliff-falling Eagles are in town. Even the Cowboys can’t screw this up. Cowboys 33, Eagles 3

GIANTS AT REDSKINS – There will be salsa dancing. Sacks. Spectacular plays by a spectacular rookie. Television loves it. The NFL loves it. You will love it. At it’s core, it’s a dirty rivalry reborn. Redskins 31, Giants 30

—
This column is sponsored by Susan Rice, Condoleezza Rice,  and rice.
–

Thank you! Here is the link to buy it on Amazon.