She wrote upon it
Return to sender, address unknown
No such address, no such zone

These week 16 NFL picks by the Returns Department see an awful lot of football fans out there in line trying to return their team’s season. 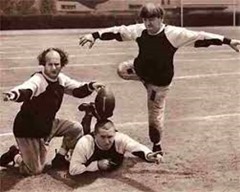 A lot of Browns fans. Familiar faces. I see them every year.

And while I am great friends with Browns fans, things are cool here because I’ve also gotten to know Cowboys fans quite well. And let’s just say that I sure love seeing Ravens fans here.

This is a fun place to work, but I admit there is stress. Some things have a No-Return policy. For instance, Donald Trump. While America is stuck with him, I have had to deal with many unreasonable people who think I’ll take him back.

But just like the football seasons that so many disappointed fans are trying to return, Donald Trump fits under our other policy: You Break It, You Bought It.

That’s just how life works. You’ll see when you stick around to see whatzgonnahappen.

CHARGERS AT RAIDERS – It goes to overtime. Yeah, the game does too, but it’s near overtime for which team gets to Los Angeles. Raiders 23, Chargers 20

REDSKINS AT EAGLES – Winning in Washington under Daniel Snyder? Has the Earth’s rotation reversed? Redskins 38, Eagles 24

PANTHERS AT FALCONS – If the Falcons had anything resembling a backbone, this game would be an upset special. Instead, it’s the game those 1-800 lines give as the lock of the week. Panthers 42, Falcons 20

JAGUARS AT SAINTS – Defense? Never heard of it. Jaguars 38, Saints 31

49ers AT LIONS – The NFL recommends that you go see “Concussion” instead of watching this game. Lions 30. 49ers 17

BROWNS AT CHIEFS – Johnny Manziel says he wants the Browns to keep Mike Pettine as coach. These are the words of a man who has lied many times before. Of course I believe him. Browns 35, Chiefs 34

COLTS AT DOLPHINS – It’s a good time of year to go to Miami. Hang out by the pool. Drink some margaritas… football? Dolphins 27, Colts 13

PATRIOTS AT JETS – The Patriots use the drone that Bill Belichick got for Christmas to spy on the Jets. Patriots 20, Jets 19

TEXANS AT TITANS – Hey, let’s go watch backup quarterbacks play in a meaningless game. I’m in! How much are tickets? Titans 20, Texans 17

PACKERS AT CARDINALS – The Packers have better uniforms and pedigree, but the Cardinals are currently the better team, Cardinals 32, Packers 24

RAMS AT SEAHAWKS – The Seahawks are playing great football and the Rams are looking for a house in Los Angeles. Seahawks 31, Rams 20

This column is sponsored by Papa John’s Pizza, and Peyton Manning’s Special Sauce.