These Week 2 NFL Picks by Donald Trump don’t like your face.

I like Tom Brady’s face. Tom Brady endorsed me. Tom is the most ethical person who ever married a supermodel. I know about these things. If you endorse me, you will look like Tom Brady or or his supermodel wife, Gisele Bundchen. Only then will I like your face.

When you cheer for a team that isn’t the Cleveland Browns, your face is stupid. Your face should be kept behind a wall. Your face has no energy because your team is run by losers,

I’m betting that you can imagine that I can offer tons of specifics about why the Cleveland Browns will be the best team in the NFL this year, despite being demolished in their first game. And you believe that sometime soon I am going to lay out in detail my reasons. I’ve got advisors. I’ve watched Jon Gruden talk on TV. I’ve played Madden. 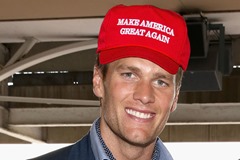 Look, by the time I make these picks I’m going to know more about football than Vince Lombardi knew about knitting. People who I pay – a lot of money, by the way – tell me that I am the smartest person they know and that I know more about the NFL than anyone. Not to be a braggart, but I am probably the greatest person who has ever lived.

I go to church. I don’t really pray to God. I more talk to Him. Give Him advice. I told God that he really screwed up with the aardvark, and I asked how could a guy create both marijuana and Josh Gordon. Not fair, I said, especially for a guy who also created the Cleveland Browns.

Turns out that God is a woman. So, yeah, you should have seen Her face when She told me Whatzgonnahappen.
BRONCOS AT CHIEFS – So it’s early in the season for me to post my Thursday predictions two days later. It works so well, I may move this whole column to Tuesday after all the games. Broncos 31, Chiefs 24

TEXANS AT PANTHERS – So Ryan Mallet is the savior now? That’s just so cute. Panthers 24, Texans 10

49ers AT STEELERS – Vernon Davis is not Rob Gronkowski, and the Steelers are most likely not in a friendly mood. Here’s hoping that the 49ers coaches enjoy listening to the Steelers radio broadcast of the game. Steelers 29, 49ers 10

LIONS AT VIKINGS – Like a bridge over troubled water, I believe in the pathetic Lions more than I believe in Teddy Glovehand. Lions 20, Vikings 12

CARDINALS AT BEARS – Many people think the Cardinals are something like an elite team. I think they are more like the Cardinals Even if they get on a roll, it doesn’t start this week. The season has no rhythm yet, so the Bears are liable to win. Bears 27, Cardinals 16

TITANS AT BROWNS – “My Heisman Trophy is bigger than yours.” While Marcus Mariota looked like Bart Starr in his first game, and Johnny Manziel’s career has looked more like Bart Simpson, this is Johnny’s breakout five-touchdown game. Browns 35, Titans 20

CHARGERS AT BENGALS – These are two classic early season powerhouses. If it’s early in the season, these teams are great. This is a playoff game that doesn’t count, but if the playoffs were held right now. Ha! Chargers 31, Bengals 30

FALCONS AT GIANTS – The Falcons have been wanting to be a powerhouse for a few years. Maybe Dan Quinn is the one to get them there. Falcons 29, Giants 22

DOLPHINS AT JAGUARS – Ryan Tannehill looks like Johnny Unitas compared to Blake Bortles, who looks suspiciously like Blaine Gabbert, who is now so anonymous that he is no longer known by his real first name, “Blame.” Dolphins 24, Jaguars 13

COWBOYS AT EAGLES – Dez Bryant isn’t playing. DeMarco Murray is. Oh wait, what team is Murray on again? Does he play for anyone? Cowboys 28, Eagles 19

This column is sponsored by the Mike Huckabee Bedroom Police Camera.