The fantasy football league I joined is toxic, and seems to go by the rules of RISK. As you can tell, I’ve got no friends so I joined this random league and it turned out to be a league with Vladmir Putin, Barack Obama, and Bashar al-Assad. 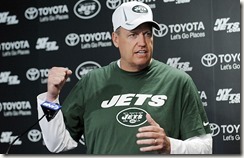 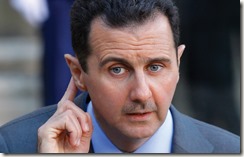 I took all Cleveland Browns players. That is always my strategy. Brandon Weeden, with only three interceptions in the first half of the first game, played above expectations, I thought. Plus, he’s got upside, or is that upside-down?

Anyway, back to my fantasy league. Barack Obama picked Andrew Luck on the advice of his campaign advisers, who suggested luck has always served him well.

Assad, a fan of toxic chemistry, went with all New York Jets. Meanwhile Putin, the ex-spy, of course went with Bill Belichick’s New England Patriots. Don’t forget, he has a Patriots ring.

What a group. Everybody’s always bitching about the rules.

All I wanted to do was have a bit of fun. You know, some chill competition among new friends is how I envisioned this league. But no. These bastards want to kill each other.

It’s only week 2. I got to tell you… I don’t know whatzgonnahappen.

JETS AT PATRIOTS – Geno Smith believes he is a good quarterback. Bill Belichick believes that is hilarious. Patriots 30, Jets 12

RAMS AT FALCONS – The Rams may develop into a good team, but the Falcons are tough at home. Falcons 27, Rams 20

CHARGERS AT EAGLES – Okay, maybe I believe a little bit in Chip Kelly’s offense… a little bit more than I do in the Chargers. Eagles 35, Chargers 25

COWBOYS AT CHIEFS – Impossible to judge the Chiefs, who last week played a middle school team from Jacksonville. But I am judge and jury on the Cowboys and I declare them average. Chiefs 23, Cowboys 21

DOLPHINS AT COLTS – After the Dolphins lose, Mike Wallace will be drinking champagne because he’ll have a big game. Next up, a reality show with T.O. and Ochocinco. Colts 23, Dolphins 20

TITANS AT TEXANS – Tennessee’s defense, dominating against Pittsburgh, won’t look as good against a team that has an actual offensive line. Texans 26, Titans 10

REDSKINS AT PACKERS – For all the RGIII hype, don’t ever forget that Daniel Snyder still owns the Washington Redskins. Packers 30, Redskins 20

BROWNS AT RAVENS – Since Brandon Weeden is better than Peyton Manning, he will throw eight touchdown passes this week. Browns 56, Ravens 3

PANTHERS AT BILLS – In the fourth quarter, both these teams start new charities but the Panthers turn out to be better at giving things away. Bills 20, Panthers 17

VIKINGS AT BEARS – When Adrian Peterson is an old man, he will have a dartboard with Christian Ponder’s face taped to it. Bears 23, Vikings 13

SAINTS AT BUCCANEERS – The Buccaneers are the worst team in the NFL (the Jaguars don’t count). Saints 42, Buccaneers 10

JAGUARS AT RAIDERS – The Jaguars hope to steal a couple of more bases this week and maybe score more than 2. Raiders 14, Jaguars 2

STEELERS AT BENGALS – Ben Roethlisberger wonders what kind of crime he has to commit to get suspended so he doesn’t have to play behind his offensive line. Bengals 24, Steelers 10

This column is sponsored by Anthony Weiner’s cellphone camera.