You got fins to the left, fins to the right
And you’re the only bait in town
– Jimmy Buffett

Roger Goodell here with your Week 3 NFL picks, starting with Thursday’s game when the Falcons beat up the Buccaneers by an ambiguous score of 56 to 14. 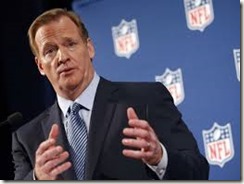 I am not quite sure what is going to happen in that game.

I think the Falcons might win. Maybe by a score of 6 to 3 or something. I won’t really know what’s going to happen unless I watch a video of what already happened. And where am I supposed to find video of an NFL game?

While the Falcons ultimately did win by a score of 56 to 14, I regret not predicting the correct score once the game was over. It was a mistake, and I am deeply sorry. I have formed a committee and even asked my best friend do an independent investigation into find out why I thought the Falcons would only win by 3, despite having been told the final score.

All I can say, is that the information I had was ambiguous. I got it wrong.

I pledge that I am going to get it right. No, not right now. Specifically, someday. I sure hope you believe that’s whatzgonnahappen.

BUCCANEERS AT FALCONS – On Saturday and Sunday, all the information I have at my disposal for the Thursday game says… Falcons 6, Buccaneers 3

CHARGERS AT BILLS – Which do you believe in least… the Chargers traveling East or the Bills continuing to win. I believe least in the Bills, but just barely. Chargers 27, Bills 24

REDSKINS AT EAGLES – DeSean Jackson thinks the Redskins should change their name… to the Eagles. Maybe he just wishes he still was an Eagle. Eagles 31, Redskins 21

TEXANS AT GIANTS – Last week, I thought the Giants would turn the corner. I meant this week. Even though JJ Watt is now catching touchdown passes along with quarterbacks, I see a Giants win. Giants 23, Texans 20

RAVENS AT BROWNS –The Ravens come back to Cleveland for the worst week of their existence in Baltimore because sometimes Karma takes almost 20 years. Browns 34, Ravens 20

PACKERS AT LIONS – Each defense should be allowed 12 players. Lions 38, Packers 33

COLTS AT JAGUARS – The Colts have to win and the Jaguars don’t, because they aren’t going anywhere. Colts 29, Jaguars 10

RAIDERS AT PATRIOTS – Given the current NFL climate, the upcoming Aaron Hernandez murder trials (plural) do not bode well for Bob Kraft, Bill Belichick and the Patriots organization. The Raiders visiting is a short-term balm. Patriots 37, Raiders 13

VIKINGS AT SAINTS – The Indoor Saints are still pretty good, and Matt Cassell is not – especially with his main weapon indicted for acting like a weapon. Saints 32, Viking 20

BRONCOS AT SEAHAWKS – The Seahawks, after losing, play at home. Peyton Manning wants revenge but you can’t get revenge for a Super Bowl loss in week 3. Seahawks 23, Broncos 20

CHIEFS AT DOLPHINS – Remember last year when the Chiefs were really good? You will this week. Chiefs 30, Dolphins 17

This column is sponsored by Fox News cheering for another war.