Week 3 NFL Picks Filmed To Insult Half of America, And The Prophet

These week 3 NFL picks, secretly filmed and translated into Stupid, are meant to insult half of the teams in the NFL. Losers, but not the Browns, are victims.

But wait! These week 3 NFL picks are also a film insulting the prophet who last week got 10 picks wrong. The Browns didn’t win. Time to riot! 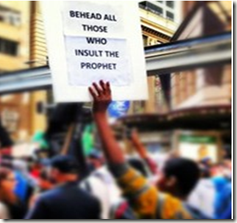 I film provocative stuff. My opinion that the Cleveland Browns are the best team in the NFL is so far outside of the mainstream that it is extremely offensive to 1.5 billion people worldwide, plus half the United States. I am trying to offend as many people as possible as fast as possible, because that is called marketing genius. How am I doing? 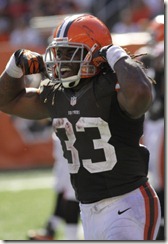 It was either film demented stuff or referee the Browns game next week. I saw an ad on Craigslist for NFL referees, no experience necessary. I am qualified, and I want to help the Browns win. But the Browns don’t need a referee on their side. They need to film a prophet who says they can ride Trent Richardson to the Super Bowl.

Last week’s prophet was a moron, so there! I hope someone is offended. I sure am. I call myself the prophet, and I am calling the prophet a moron. How is that for blasphemy squared?

I just want to get my message out that last week the prophet was horrible. For instance, it was stupid to pick the Browns to beat the Bengals. The Bengals were destined to win because the replacement referees stink, right? That’s how my logic works… without logic. I feel like such a victim. I am entitled to a winning team, dammit!

Anyway, if you are one of the 1.5 billion people plus half the U.S.  who I tried to insult, I assume you are a Pittsburgh Steelers fan, because why else would I hate you so much? I can’t think of any other reason why I would hate anyone. That’s a lot of y’uns. So yeah, I insult your prophet. Entitled idiots! .

GIANTS AT PANTHERS – According to etiquette, Tom Coughlin sends an engraved invitation to the Panthers to observe the Giants final kneel down. The Panthers do not RSVP. Panthers 33, Giants 23

RAMS AT BEARS – Bipolar Jay Cutler puts on a happy face and throws to all his friends in Chicago. Bears 36, Rams 21

BENGALS AT REDSKINS – The script (and yes, there is a script, thanks for asking, Mr. Hulk Hogan, of Long Ago, California) says that Robert Griffin III wins with a late touchdown. Redskins 27, Bengals 24

LIONS AT TITANS – The Lions should be a good bully type team and this is a game made for a bully. Lions 24, Titans 19

CHIEFS AT SAINTS – So this is what the doctor prescribed for the Saints. Saints 44, Chiefs 10

49ers AT VIKINGS – The 49ers are too efficient for the Vikings to have a chance. In this case, the Vikings are victims. 49Ers 31, Vikings 20

JETS AT DOLPHINS – Reggie Bush discovers that no matter what he or anyone in the game does, the backup quarterback for the Jets is the star. Dolphins 25, Jets 21

BILLS AT BROWNS – The Browns defense knocks Ryan Fitzpatrick back to community college, while Trent Richardson tutors C.J. Spiller on how to control the game. Browns 23, Bills 20

BUCCANEERS AT COWBOYS – As the Cowboys are destroying the Buccaneers, they keep throwing long passes and trick plays to humiliate the Buccaneers into playing to the last play. Get used to it. Cowboys 40, Buccaneers 13

JAGUARS AT COLTS – The rookie quarterback is much more mature, and talented, than the second-year guy. Colts 23, Jaguars 19

FALCONS AT CHARGERS – The new fraudulent team versus the old fraudulent team. Which gets to keep the illusion alive longer? The home team does. Chargers 24, Falcons 23

EAGLES AT CARDINALS – Kevin Kolb was supposed to start in front of Michael Vick. Instead, he beats him fair and… well, the replacement refs help. Cardinals 25, Eagles 22

STEELERS AT RAIDERS – Something crazy, maybe a special teams play, makes this an old school game between these two teams. Raiders 24, Steelers 20

TEXANS AT BRONCOS – Old Peyton Manning might be turning into old Joe Namath before our eyes. Texans 27, Broncos 16

PATRIOTS AT RAVENS – Joe Flacco is better in the clutch than Tom Brady. Wes Welker reads “Fifty Shades of Gray” on the sidelines, and Ray Lewis is appointed ambassador to Libya. Ravens 27, Patriots 24

PACKERS AT SEAHAWKS – With a record like mine, it’s crazy to pick an upset like this. My logic is that week 3 is a good week for an upset. Seahawks 24, Packers 21

—
This column is sponsored by 47 percent entitled thoughts.