I came to the United States because I was told that Johnny Manziel was playing this week for the Browns. So here I am, and now I find out that Josh McCown is playing instead. Jesus Christ! 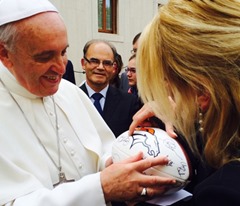 I was going to drive my Fiat to Cleveland and hang out in the dog pound with my new best friend, Donald Trump, while we talked about immigration like a couple of adults with a direct phone line to God.

Instead, I am in Philadelphia. And frankly, even I can’t help the Eagles. Sam Bradford as your quarterback? Now that’s a prayer. Tim Tebow doesn’t even play for the Broncos.

So I know what you are thinking. Whenever a Pope visits the USA, he usually goes to Boston.

I did not go there because the New England Patriots have clear connections to the other side. That first became clear when they pulled off that deflated ball trick, and then blamed it on God. I asked, and even He can’t figure out how they did it. But He is sure they are guilty.

One more thing: I see that Russell Wilson and Aaron Rodgers have been arguing about whether God is a Packers fan or Seahawks fan. Both are laughable. God is a Browns fan. Although he is infallible and all that, he cheers for the Browns as a way to stay in touch with human suffering.

Trust me, God is worried about all aspects of human suffering. He created it. Why wouldn’t he worry about it? But I expect on Sunday when I am in Philadelphia watching a crappy Eagles game on TV with Mike Huckabee, God will text me and ask, “Can you believe Johnny Manziel isn’t starting?”

REDSKINS AT GIANTS – Every time the Giants score, Jason Pierre Paul turns to a friend and says, “Give me three.” Giants 32, Redskins 21

STEELERS AT RAMS – Ben Roethlisberger is a sandwich in some restaurants, and for the Rams defensive line. Rams 23, Steelers 16

CHARGERS AT VIKINGS – These are different versions of mediocre, like an argument between beige and manila. The envelope please: Vikings 20, Chargers 19

BUCCANEERS AT TEXANS – Ryan Mallet has his best day as a pro, and Jameis Winston has some growing pains named after JJ Watt. Texans 29, Buccaneers 20

EAGLES AT JETS – It looks like a mob hit  in the toxic part of New Jersey. Sam Bradford’s body, riddled with interceptions, is found on Revis Island. Jets 24, Eagles 10

SAINTS AT PANTHERS – Diving for a touchdown, Cam Newton thinks football is Olympic skating as he does a quadruple spin Salchow jump landing in the end zone in a basic sit spin shoot-the-duck position. Meanwhile, the Pope came to America and named a saint, but not Sean Payton or Drew Brees. Quite telling. Panthers 31, Saints 17

JAGUARS AT PATRIOTS – Patriots scientists have invented a new kind of grass that recognizes the uniforms of opposing players and trips them. They call it Beligrass. Patriots 47, Jaguars 27

RAIDERS AT BROWNS – Josh McCown plays like Johnny Unitas, but the fans still want Johnny Manziel. The Raiders vow to keep an eye on Travis Benjamin, and they do. They watch him score three touchdowns. Browns 32, Raiders 22

49ers at CARDINALS – The 49ers are not as bad as I thought they’d be, but the Cardinals are as good, and maybe better than I thought. So I think this. Cardinals 30, 49ers 20

BEARS AT SEAHAWKS – Even though they are both 0-2, only one of these teams is a charity case. Seahawks 41, Bears 20

BILLS AT DOLPHINS – The teams argue the whole game over who hates the Patriots more. Dolphins 29, Bills 21

LIONS AT BRONCOS – Peyton Manning is capable of a good half of football, but not a consistent good season. But he’ll win here because the Broncos defense will put a hurt on Matthew Stafford. Broncos 20, Lions 10

CHIEFS AT PACKERS – Aaron Rodgers at home. You don’t need insurance on this one. Packers 34, Chiefs 24

This column is sponsored by the green leaves of summer.