If loving you is wrong, I don’t want to be right
– Tom Jones

These week 4 NFL picks are wrong, dead wrong. There’s clear evidence. Still, I insist they are right because they come from the fellows at Foot Locker. 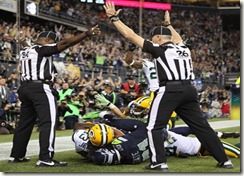 As the NFL began resembling the WWE, politicians of both parties – who believe diverse things about unions  – agreed that it was time to bring back the “real” referees. This was actually the only item in the past decade or so in which politicians in both parties have agreed.  There is nothing more important to the survival of our country than the integrity of a call in an NFL end zone.

War? Taxes? The Deficit? Jobs? The environment? The economy? Are you kidding me! Did you see that Packers game!

That’s why these picks are always so deliberately horrible (although I did pick the Seahawks to beat the Packers… draw your own conclusions) It’s the only way to get everyone to work together. Prove me wrong. Go on, I dare you to find a non-NFL issue that Democrats and Republicans agree on. We are one nation under the NFL. Ask a Democrat. Or ask a Republican. They’ll tell you whatzgonnahappen.

BROWNS AT RAVENS – Art Modell is dead. I smell a Cleveland Browns Super Bowl, or maybe that’s just Art’s dead body. Ray Lewis drowns in the evil man’s ghost feces while standing on a tarmac at the Baltimore airport. And then Trent Richardson teaches Ray Rice how to play. Browns 35, Ravens 23

VIKINGS AT LIONS – The Vikings are better than the Lions? Nah, last week was a setup. Lions 24, Vikings 20

SEAHAWKS AT RAMS – Who knew this game would seem to matter? Well, maybe the replacement referees knew. Rams 20, Seahawks 17

CHARGERS AT CHIEFS – Before last week, I thought the Chargers were good and the Chiefs were bad. Chiefs 24, Chargers 21

BYE AT COLTS – Andrew Luck works on his Hall of Fame acceptance speech.

TITANS AT TEXANS – Chris Johnson is washed up enough to audition for a Pauly Shore movie. The Texans are solid and look Super Bowl bound Texans 40, Titans 20

PANTHERS AT FALCONS – Matt Ryan looks like the best quarterback in the NFL, while Cam Newton is looking like the guy some warned against drafting. Time changes everything… well, except the Browns for the last decade. Falcons 28, Panthers 14

BYE AT STEELERS – The Steelers give up four touchdowns.

PATRIOTS AT BILLS – Bill Belichick can’t blame the referees, so he grabs 93-year-old Ralph Wilson and screams at him. Bills 28, Patriots 27

BENGALS AT JAGUARS – Karma says the Bengals will find a way to lose and stop their forward motion. After all, they are the Bengals. Jaguars 20, Bengals 17

DOLPHINS AT CARDINALS – The Cardinals defense against a Reggie Bush-less Dolphins is not fair. Cardinals 24, Dolphins 17

RAIDERS AT BRONCOS – Peyton Manning has a few good games left in him, and this is one. Broncos 29, Raiders 22

REDSKINS AT BUCCANEERS – Although Robert Griffin III will be special, the Redskins are already playing to give the Rams a better draft pick. Buccaneers 24, Redskins 21

SAINTS AT PACKERS – The Saints have the worst defense in football, and the Packers have a week of rage to take out on that bad defense. Packers 50, Saints 37

GIANTS AT EAGLES – NFL defenses have been treating Michael Vick like a bad dog, and he doesn’t like it. Mr. Vick, meet Mr. Jason Pierre-Paul. Giants 26, Eagles 23

BEARS AT COWBOYS – In a battle of untrustworthy quarterbacks, I trust Tony Romo way more than I trust Jay Cutler. Cowboys 20, Bears 14

This column is sponsored by Mitt Romney’s hair.
—