Week 5 NFL Picks on the Road Sign to the Apocalypse

The Cleveland Browns are in first place, so I am afraid of the Apocalypse. I called the government, but they are afraid too. They have shut down. 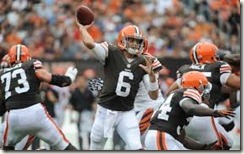 Look, I saw that movie, “Life of Brian.” Who is the quarterback of the Cleveland Browns? Yes, Brian Hoyer. As the guy on the car insurance commercial says, It’s not complicated.

I am so sure of this, I am going to party like it’s 1999, which, coincidentally, is the year the “new” Cleveland Browns were born. And now the entire government has run to their underground bunkers in undisclosed locations because they can hear four horsemen riding into town. One is riding a Denver Bronco.

For it is only Peyton Manning who could possibly derail this wonderful Apocalyptic vision of mine.

The world is ending

What I am saying is, If the Cleveland Indians meet the Pittsburgh Pirates in the World Series, don’t buy green bananas. If this is actually the Apocalypse, as any Cleveland fan can only hope,  then Brian Hoyer will continue to perform miracles. Yeah, that’s whatzgonnahappen.

BILLS AT BROWNS – Brian Hoyer is the best quarterback in NFL history, and perhaps the greatest human born in the last 2013 years. Browns 30, Bills 10

JAGUARS AT RAMS – Excuse me, my body makes those noises sometimes. You may want to breathe in the other direction. Rams 3, Jaguars 2.

CHIEFS AT TITANS – Whenever I can root for a quarterback from Harvard, I do. Titans 20, Chiefs 17

EAGLES AT GIANTS – This is the Lone Ranger movie of the NFL, a high budget once-upon-a-time hyped-up disaster of a show. Somebody’s got to play well and win. Nobody plays well for the Giants. Eagles 30, Giants 20

SEAHAWKS AT COLTS – This game is about Russell Wilson versus Andrew Luck. The other players do not count and should just stay home. That mean you, Trent Richardson. Colts 24, Seahawks 21

SAINTS AT BEARS – I love the Saints this year, but they will not go undefeated. A road game in Chicago after a short week equals a bump in the road. Bears 26, Saints 24

PANTHERS AT CARDINALS – This will feature a bad Cam Newton game, and more than one Larry Fitzgerald touchdown. Cardinals 23, Panthers 13

BRONCOS AT COWBOYS – If Peyton Manning wasn’t superhuman, this would have the makings of a Broncos letdown game. Broncos 42, Cowboys 30

TEXANS AT 49ers – Colin Kaepernick tweets from the huddle, and has his best game of the season. 49ers 27, Texans 12

CHARGERS AT RAIDERS – This game is expected to be over by sunrise on the East Coast, but Walter White is out of business. How am I to stay awake? Philip Rivers has a great game, like you read about. Which I will, in the morning. Chargers 31, Raiders 21

JETS AT FALCONS – Matty Melting Ice should be Matt Ryan’s nickname. You can just call Geno Smith, “quarterback of the Jets,” and yes, that’s an insult. Falcons 31, Jets 13

BYE AT VIKINGS – Adrian Peterson’s daughter tells him that she is now a Browns fan.

BYE AT STEELERS – Toothbrush sales have gone up. Nothing else to do on Sundays any more, so Steelers fans have a new hobby, brushing their tooth.

BYE AT REDSKINS – Congress unanimously agrees that it is more concerned with the health of RGIII’s knee than it is with America’s health.

This column is sponsored by Albert Belle.