Week 6 NFL Picks By The CDC

Is it murder, is it rape, is it the Watergate tapes
Or a mere hallucination caused by folks from outer space
No, it’s a skinny little boy from Cleveland, Ohio
Come to chase your women and drink your beer
– Alex Bevan

These Week 6 NFL Picks have been quarantined in Cleveland with Yee-Hoyer Disease. It is contagious, and deadly for opponents. 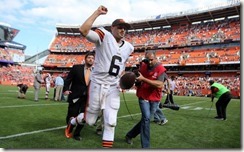 That’s what’s so freaky about this Yee-Hoyer Disease. I love this disease! Is it a flu, a virus? I don’t know, but the symptoms rock.

I am a Browns fan, so I know how it all ends. There will be heartbreak. It’s just a matter of when, what kind, and to what degree.

But this Yee-Hoyer disease causes fever and weird hallucinations of a Super Bowl parade in Cleveland. Get that doctor away from me! I like this version of whatzgonnahappen.

PATRIOTS AT BILLS – Until further notice, Tom Brady’s good game is the aberration in the pattern. More importantly, so is the good game of the Patriots offensive line. Plus, with new owners, this is the biggest game in the history of Buffalo. Yep, Week 6 in Buffalo – epic. Bills 27, Patriots 20

PANTHERS AT BENGALS – The Bengals are who we thought they were, afraid of bright lights. Not to worry. No bright lights for this game. Bengals 31, Panthers 20

STEELERS AT BROWNS – Brian Hoyer has the best day of his NFL life, profoundly flipping this rivalry. After he wins four or five Super Bowls as quarterback of the Browns, it won’t be better than beating the Steelers. Can it be? I mean, I have no idea on either. Browns 37, Steelers 36

LIONS AT VIKINGS – Teddy Bridgewater will always be pretty good whenever he isn’t injured. Vikings 27, Lions 19

BRONCOS AT JETS – So the Broncos fly in on Mountain time, right? That gives Geno Smith a two-hour head start, which seems like a logical reason to pick the Jets to win. Jets 24, Broncos 20

RAVENS AT BUCCANEERS – The Buccaneers are not collapsing, Just losing a lot. Ravens 38, Buccaneers 23

JAGUARS AT TITANS – As great as the NFL is, it’s the middle of October and this game is irrelevant. Jaguars 20, Titans17

CHARGERS AT RAIDERS – This is the kind of stupid game that the Chargers from past years would lose. I think they have turned that page. Chargers 40, Raiders 20

BEARS AT FALCONS – The Falcons confuse me. The Bears stupefy me. Falcons 33, Bears 30

COWBOYS AT SEAHAWKS – What? I can’t hear a word you’re saying if you are talking about the Cowboys winning this game in that loud stadium. Seahawks 28, Cowboys 20

GIANTS AT EAGLES – The Giants have looked better lately but this game will slow that momentum. Eli and the Giants are good at grinding. This game proves the season is a grind. Meanwhile, the Eagles aren’t grinders, they’re lucky. Eagles 27, Giants 24

BYE AT CHIEFS – Andy Reid gives Jamal Charles the carries he meant to give him in last week’s game. He’s on my fantasy team this week.

BYE AT SAINTS – Rob Ryan gets a haircut, weight-loss surgery and a sex-change operation, but his defensive philosophy of “give up a lot of points” remains steady.

This column is sponsored by hugs from heaven.