Week 7 NFL Picks From Inside of A Protective Suit

These Week 7 NFL Picks are coming from inside the protective suit of my warped perspective, as my favorite football team is about to play its next three games against the Jacksonville Jaguars, Oakland Raiders, and Tampa Bay Buccaneers – combined record, 1-16.

I have a false sense of confidence. It makes me extraordinarily happy.

I feel so secure in my belief that the Cleveland Browns are about to look like the best team in the NFL that I’m sure it will, within weeks, be clear to everyone else that there is no saving me from this fever and these delusions. And that’s fine with me too. 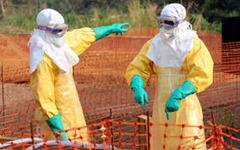 If the end comes and I must bury this NFL season as I have every other NFL season of my life, abandoned by the team that I love, I will savor my team from inside of this protective suit, with no peripheral vision to speak of.

Living inside this protective suit is really not that bad. Did you know you can tailgate inside these things. Yep, I’ve got beer in here and I’m cooking cheeseburgers. So frankly, I don’t care whatzgonnahappen.

FALCONS AT RAVENS – Two big armed quarterbacks, but Joe Flacco is better and Steve Smith is the first player on the Baltimore Ravens I’ve ever liked even for a moment, and I was vomiting at the time. Ravens 30, Falcons 20

VIKINGS AT BILLS – It’s a bad pun but I am tired, so like a bridge over troubled water, Teddy Bridgewater tumbles over Niagara Falls with the Bills defense chasing him. Bills 31, Vikings 13

DOLPHINS AT BEARS – Chicago and Jay Cutler are always up and down, as are the Dolphins and Ryan Tannehill. The Bears are at home, and the Dolphins really are the Dolphins, while Tannehill should worry that next year’s fifth round draft pick will beat him out. Bears 36, Dolphins 24

PANTHERS AT PACKERS – Sure, it’s in Green Bay and the Packers offense looks awesome. Cam Newton wins the game by himself, because the Packers defense is offensive. Panthers 41, Packers 38

BENGALS AT COLTS – The Bengals could not take being called the best team in the NFL, and it may take them weeks to recover. Colts 27, Bengals 23

BROWNS AT JAGUARS – Johnny Manziel sells Johnny Bench jerseys. Brian Hoyer hears that Brian Sipe has already recommended that the play, Red Right 88 be taken out of the playbook.  It’s at that level in Cleveland. And Blake Bortles wishes he had the opportunity to change his name to Blake Bench. Browns 32, Jaguars 22

SEAHAWKS AT RAMS – This is going to be closer than you think, but the Seahawks will win and make you question why you think they are so good. Seahawks 23, Rams 17

TITANS AT REDSKINS – Kirk Cousins gets one more game tape that he can show to his grandchildren. Redskins 30, Titans 25

CHIEFS AT CHARGERS – Philip Rivers plays just like Bernie Kosar, and gets the kind of credit Kosar did – not enough. Chargers 31, Chiefs 21

GIANTS AT COWBOYS – As much as it pains me, the Cowboys are on a roll. I take comfort in knowing it shall not last into January. Still, it was fun to watch Jerry Jones be so billion-dollar sad. Cowboys 28, Giants 16

CARDINALS AT RAIDERS – Derek Carr is actually going to be pretty good – maybe, possibly, perhaps even plausibly… if stupid people quit running the Raiders. But not good enough this week. Cardinals 29, Raiders 19

49ers AT BRONCOS – Peyton Manning versus that 49ers defense is one of the reasons that God invented the NFL. Broncos 32, 49ers 29

BYE AT EAGLES – LeSean McCoy leaps a tall building in a single bound.

BYE AT BUCCANEERS – Curled up sobbing in a locked room under the covers. That’s the official pose of Buccaneers fans this year.