Oh a storm is threatening
my very life today
If I don’t get some shelter
Oh yeah, I’m gonna fade away
– The Rolling Stones

Welcome to Week NFL 8 picks at the Obamacare website, where nothing works. For instance, these are hockey scores. 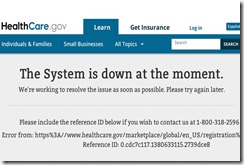 If you have a pre-existing condition such as cheering for the pathetic Cleveland Browns, you will be covered but it’s not like it will do any good. You won’t get better and the condition is terminal as you will surely die while doing this.

But if you insist on having an operation to remove your bad quarterback and replace him with  a journeyman quarterback, Obamacare actually approves this nonsensical procedure. Jason Cambell is now your quarterback instead of Brandon Weeden. Happy?

If you have actually made it this far into to the website, we can identify you as a Cleveland Browns fan because no one else is willing to wait as long as you are. Thus, this Obamacare website is written in your terminology. For instance, the health care bill was passed so that it would be impossible to use, just like a Brandon Weeden pass.

Look, we can’t pay for any of this. Essentially, Obamacare is a placebo to make you feel better, especially if you suffer from the awful disease known as Cheering For The Cleveland Browns. In fact, the only known cure for this condition is to drop an anvil on your head.

So now that you know all about Obamacare, we are sad to inform you that this website is broken and although the various NFL betting plans are clearly listed below, the only health care plan available is the one that is currently unavailable. All operators are busy.

Thank you for visiting the Obamacare website, where if you turn your head and cough, you’ll find out whatzgonnahappen.

PANTHERS AT BUCCANEERS – This is the ultimate NFL ratings measuring stick. This sucky game against the World Series. What will it be, America? Panthers 14, Buccaneers 13

49ers AT JAGUARS AT LONDON – The Jaguars are turned away by customs at the airport. “We were told they were sending a real NFL team!” 49ers 42, Jaguars 17

BROWNS AT CHIEFS – Jason Cambell leads the Browns into Arrowhead against the undefeated Chiefs. What’s not to like? In fact, I feel pretty good about the Browns chances in the AFC championship game rematch with Cambell at the helm. Yes, I own an anvil, why do you ask? Browns 17, Chiefs 13

DOLPHINS AT PATRIOTS – The Dolphins are in free fall. The Patriots can’t even find that in the dictionary, although “bad game” is showing up with disturbing frequency, even in some wins. This will be a good Tom Brady at his peak kind of game. Patriots 30, Dolphins 14

GIANTS AT EAGLES – After seeing Josh Freeman’s first game as a Viking, do the Giants get Matt Barkley? Michael Vick makes this a completely different game but still not enough. Sure, the Giants stink. But the stench has lessened now that they have one win. Make it two. Giants   24, Eagles 20

BILLS AT SAINTS – By halftime, negotiators try to stop the carnage. Saints 45, Bills 13

COWBOYS AT LIONS – Matt Stafford will have a big game. So will Tony Romo, but not as big. He won’t have an opportunity to even make a last-minute blunder, as it will be over long before the last minute. Lions 31, Cowboys 21

JETS AT BENGALS – The Jets just beat the Patriots so I am sure that Rex Ryan has convinced Geno Smith that he just won Super Bowl. That never works. Bengals 24, Jets 12

STEELERS AT RAIDERS – I am not buying the Steelers resurgence. Not at all. Raiders 26, Steelers 19

REDSKINS AT BRONCOS – All the touchdowns Peyton Manning didn’t throw last week are going to be thrown this week. Broncos 56, Redskins 31

FALCONS AT CARDINALS – Every once in a while, Carson Palmer has a good game. It’s weird, but here it is. Cardinals 29, Falcons 20

PACKERS AT VIKINGS – Adrian Peterson will have an overdue big game, but his quarterback, Josh Freeman or Christian Ponder, will play exactly like a Minnesota Vikings quarterback. Meanwhile, Aaron Rodgers can throw touchdown passes in his sleep. Packers 34, Vikings 24

SEAHAWKS AT RAMS – The Seahawks defense is not nice to Kellen Clemens. Not nice at all. I’m telling Mom. Seahawks 27, Rams 9

BYE AT RAVENS – After losing the the Steelers last week, the Ravens all sign up for golf lessons.

BYE AT CHARGERS – The Chargers walk around acting like tough guys, and they can actually sort of get away with it.

BYE AT TITANS – Now that Bud Adams is dead, they change the name back to Oilers and move back to Houston

BYE AT TEXANS – Hearing the Oilers are coming back, the Texans move to Los Angeles.

This column is sponsored by the video game, Hipster Concussions.