He was taken to task by some critics who asked,
Do you write the words or lyrics first?
– The Michael Stanley Band

Here we go again… with blind faith on par with that of a Donald Trump supporter snorting Mexican cocaine off a Russian Bible at a Stormy Daniels show, these 2018 NFL Season Picks are ambitiously picking last year’s winless Cleveland Browns to win this year’s Super Bowl.

First, I would like to take a moment to kneel for our National Random because Oh say can you see what in the loyal hell is going on?

Apparently while I was watching the newest of eight 10-part documentaries about Baker Mayfield’s overwhelming shyness, President Trump consummated a torrid affair (worthy of tic-tacs) with an American flag in a Russian hotel room just after meeting with Vladimir Putin to tell him that hacking last year’s NFL season helped make America great again.

I may not have the details exactly correct on this. You know, because of the fake news. But I have seen incriminating photos. 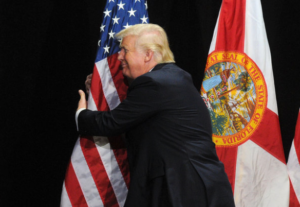 Still, does anyone really know any details about anything?

And my perspective on last year’s Super Bowl is that the 2017 season was hacked by the Russians because anyone with a brain (meaning anyone who thinks EXACTLY like me) knows that the Cleveland Browns would have won the Super Bowl if the Russians didn’t interfere by inventing analytics.

If you don’t know what “analytics” are, google it. Did I mention the Russians invented it.

But that was then, before Baker Mayfield arrived to the call of a million trumpets played by angels. I am true believer and so I have willed it to have happened, therefore it did. The trumpet thing, that is.

Now, obviously, America is great again. We are, essentially, at a Charlie Sheen level of “Winning!” In fact, the President was right when he suggested early in his campaign that we might get sick of his kind of winning. I am literally nauseous.

Apparently my orange vomit, after being analyzed in a ICE lab in Virginia, means that I have failed some kind of a loyalty test.

New rules say that although my grandparents arrived here and started cheering for the Cleveland Browns (born in 1946) more than 100 years ago, I can be deported to the old country. I’m not even sure what country that is.

Yeah, first they came for the Browns fans, and you said nothing.

So if I were you, and I cheered for your team, I’d be worried about whatzgonnahapen.

This column is sponsored by the popular board game, Witch Hunt.