I told them to get me out of the mine in time to predict week 6 in the NFL. I really meant that I wanted to be able to watch the Browns/Steelers game without having to listen to Enrique, who is a Steelers fan and has been bragging about it every day for the last 10 weeks.

Just get me out of here for the Browns/Steelers game, I said. 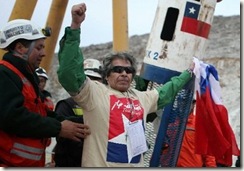 Chilean President Sebastian Pinera, who is also a Cleveland Browns fan, said he personally guaranteed that I’d get out in time to watch the Browns beat the Steelers. All of Chile cheers for the Cleveland Browns. All of Chile except for Enrique, who cheers for the Steelers. I asked President Pinera to leave Enrique down there in the mine, but he said that Enrique coming to the surface to witness the Browns beating the Steelers is a fine outcome to Chile’s national drama.

President Pinera pointed out that saving us miners 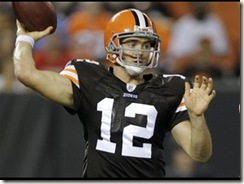 was a real feat of engineering, but when the Browns beat the Steelers with Colt McCoy starting his first game in the NFL, that will be a miracle. He smiled, and then guaranteed that’s whatzgonnahappen.

LIONS AT GIANTS – The script in 2007 was that the Giants stunk and Tom Coughlin was a horrible coach. And then the defense caught fire and they won the Super Bowl. Just sayin. Giants 27, Lions 20

RAVENS AT PATRIOTS – Ray Lewis comes down with a fatal case of Randy Mossitude. Patriots 24, Ravens 21

BYE AT CARDINALS – It’s Max Hall’s world. We only live in it.

BROWNS AT STEELERS – Ben Roehlisberger is the new president of the Brett Favre fan club. Colt McCoy has a successful game by avoiding a high ankle strain. Browns 17, Steelers 16

DOLPHINS AT PACKERS – One team has been renamed the Green Bay Backups. Still, Chad Henne is the other quarterback. Packers 21, Dolphins 18

FALCONS AT EAGLES – In what should have been Michael Vick week, Jerome Harrison runs for 200 yards. Eagles 22, Falcons 20

BYE AT BILLS – Researchers have discovered that Chan Gailey and Mr. Magoo are cousins.

SAINTS AT BUCCANEERS – Who dat? Dat the team that’s not going to win another Super Bowl. Buccaneers 24, Saints 20

CHIEFS AT TEXANS – In a bounce-back game, the Texans bounce higher. Texans 27, Chiefs 21

BYE AT PANTHERS – Jimmy Clausen asks to get traded back to Notre Dame.

RAIDERS AT 49ers – In this week’s episode of the Mike Singletary Show, Mike baptizes his players with cow’s blood before the game. Raiders 20, 49ers 12

JETS AT BRONCOS – The Jets look like they might be the best team in the NFL right now. I don’t like how that looks. Broncos 29, Jets 22

COWBOYS AT VIKINGS – Nothing gets between me and my Wranglers, except a cell phone camera. Vikings 23, Cowboys 21

BYE AT BENGALS – When Carson Palmer is sent to buy milk, he buys eggs. The cashier at the convenience store boos.

TITANS AT JAGUARS – David Garrard is a generous host.Titans 22, Jaguars 18

This column is sponsored by self-doubt.