The game was Thursday night, and the official scoreboard read Steelers 14, Browns 3, I don’t  remember the second half because I took a helmet-to-helmet hit while watching the game. I 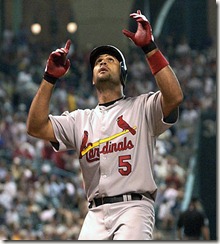 sent myself right back in to watch, but no matter what I did I could not get the team to play better.

This is not about me being Albert Pujols. This is what Albert Pujols $254 million week 14 NFL picks would look like, if he hadn’t already bet it all on the Browns/Steelers game. But if I was Albert Pujols, I wouldn’t have $254 million. I would have signed with the Cleveland Indians.

But since Albert Pujols signed with the Los Angeles Angels, he has $254 million that he most likely will bet on these games. Sure, that’s whatzgonnahappen.

PATRIOTS AT REDSKINS – This is for the Albert Haynesworth Trophy – a box of nothing. Patriots 28, Redskins 20

SAINTS AT TITANS – Chris Johnson is brilliant again, but the Saints offense is better. Saints 29, Titans 24

CHIEFS AT JETS – Mark Sanchez throws an interception and Tyler Palko throws a touchdown pass because I want Palko to be better than Sanchez. Chiefs 20, Jets 17.

EAGLES AT DOLPHINS – The Dolphins went from the Andrew Luck sweepstakes to good luck beating this team in less than two months. Dolphins 24, Eagles 21

FALCONS AT PANTHERS – His team stinks, but Cam Newton is already better than Matt Ryan. In this game, his team is better too. Panthers 27, Falcons 20

TEXANS AT BENGALS – Two teams going up the bell curve, but there’s only one T.J. Yates. Texans 20, Bengals 17

49ers AT CARDINALS – Beanie Wells may take advantage of Patrick Willis absence, but the Alex Smith offense will be efficient enough to win. 49ers 24, Cardinals 15

RAIDERS AT PACKERS – The Packers are having the quietest perfect season ever. Ho hum, the Packers win again… Packers 32, Raiders 22

BILLS AT CHARGERS – Every year I jump on a bandwagon. The Bills ran the shoddiest bandwagon I’ve ever been on. I apologize for such an amateur move. Chargers 33, Bills 17

GIANTS AT COWBOYS – Ahmad Bradshaw is back, and he is a very good football player. Giants 24, Cowboys 19

RAMS AT SEAHAWKS – Pete Carroll writes a Seahawks fight song that the team sings before every game. Seahawks 20, Rams 19

This column is sponsored by bacon.