These week 9 NFL picks want to thank you for your vote, and remind you that we are going to fix everything just like we did the last time we ran things.

We just heard from our opponent, the incumbent, and we have accepted his congratulations. We’d like to thank him for a tough campaign, but now it’s time to cut spending and take our column back.

So the first change is if you are sick and need medication to enhance your performance, tough luck. Got that, Shawne Merriman? Next, remember that banks and corporations  are people too. See Randy Moss, the organization actually is more important than your titanic talent. Finally, no matter what happens, at heart we are all patriots and the Patriots seem to always win. So that’s comforting, I guess. 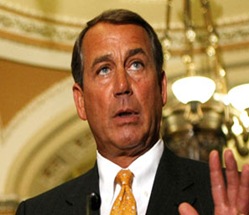 to thank my colleagues for electing me as the  Speaker of the Column. It is quite an honor. I know that the media’s first question is, why is my skin orange? It is because I am a Cleveland Browns fan.

Our first cost-cutting measure as the party in charge of this column is to outsource these picks to Halliburton. It was clear that British Petroleum didn’t know what they were doing, and the government takeover, known as ObamaPicks, was also a failure. No one I know felt stimulated. So we’ve gone to Halliburton,  the only bidder. Trust us. We think they know what they’re doing. And they should for what we’re paying them! Yeah, that’s whatzgonnahappen.

SAINTS AT PANTHERS – The Saints finally woke up. The Panthers have swallowed a Panther tranquilizer. Saints 31, Panthers 10

PATRIOTS AT BROWNS – The Browns 1970s on-the-ground offense outscores the legend.  The defense is opportunistic and the Browns quarterback, whatshisname, outplays the legend. After the game, Eric Mangini hands Bill Belichick a gift videotape of their time working together. Browns 20, Patriots 17

BYE AT BRONCOS – Every kid that came to Josh McDaniels house on Halloween was wearing a Tim Tebow jersey.

BUCCANEERS AT FALCONS – This is what is sounds like when you pop a balloon. Falcons 27, Buccaneers 19

BYE AT JAGUARS – The petition asking to play the Cowboys again is denied.

DOLPHINS AT RAVENS – Ray Lewis dies of voter fatigue after the battle of two young over-rated quarterbacks is decided by the Ravens defense. Ravens 19, Dolphins 12.

CARDINALS AT VIKINGS – Brad Childress cuts the janitor. When he gets home, he announces to the family that he is cutting the dog. Vikings 24, Cardinals 14

CHARGERS AT TEXANS – Philip Rivers, the modern Bernie Kosar, is as good as any quarterback in the league. His coach, however, is like a bartender pouring draft Pabst Blue Ribbon. Chargers 37, Texans 23

BYE AT 49ers – I believe in Troy Smith. But if he hadn’t played well in London, Tim Lincicum would be the next 49ers quarterback. Hey, Mike Singletary watched the World Series, and his strategy appears to be stubborn spontaneity.

GIANTS AT SEAHAWKS – You know what would be a fun reality show? If Tom Coughlin and Pete Carroll had to be roommates. Giants 24, Seahawks 18

COLTS AT EAGLES – I can’t think of a reason why Michael Vick shouldn’t return to being the best (yes, even in this game) quarterback in this season’s NFL. Eagles 29, Colts 27

CHIEFS AT RAIDERS – Len Dawson versus Daryl Lamonica. Oh man, those were the days. What? Oh, sorry, I was dreaming of when this game was relevant. What? It is again? You’re kidding, right? Chiefs 21, Raiders 20

COWBOYS AT PACKERS – Like you, I wonder about the pictures Wade Philips has of Jerry Jones. Packers 25, Cowboys 17

BYE AT REDSKINS – They voted the bums out and replaced them with different bums. Are you listening Donovan? Rex?

STEELERS AT BENGALS – In a pre-game conference, the officials award the Steelers 7 points to start the game.

This column is sponsored by the mathematical symbol for infinity.