These week 2 NFL picks were supposed to occur on International Burn The NFL Rulebook Day.

I told my my congregation of 50 about it, but then the most eminent citizens of the world begged me not to burn the book or make the picks.

To billions worldwide, I was told, the NFL rulebook is a sacred book, and the outcomes of the games are apparently unknown to everyone but me and one Las Vegas bookie. 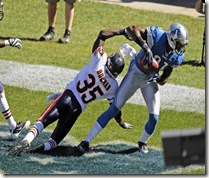 Politicians and clerics first urged me to cancel my planned book burning. Initially, I didn’t care. Still, I turned to a higher power. I drank beer.

This, for a while, made me want to prove that it’s logical to get back at the bits of incomprehensible logic inside of a fine NFL rulebook by burning the book. It made perfect sense to me. I shouted in a logically obstinate way. I had visions. I was thrilled to see myself on TV. Weren’t you?

I drank more beer and soon I was speaking in tongues – forked tongues. The rules are sacred, I declared piously. But not that one rule. For gosh sake, I demanded. For gosh sake!

So yes, I called off the book burning.

You know what happened next, don’t you? Calvin Johnson scored a touchdown to win a game but then he didn’t because of that book. Written by infidels, I tell you. That book is the work of the devil.

It’s frightening when the rule interpreters are so sanctimonious as to believe they know the future better than anyone. Unless it’s me. Because I do. Yes, beer sometimes speaks to me, or for me. I have beer, which means I have charisma!

Gosh, it’s great to give you you this fire and brimstone version of whatzgonnahappen.

BUCCANEERS AT PANTHERS – The Buccaneers receive another gift-wrapped victory. This week, the win comes courtesy of Jimmy Clausen and his deer-in-the-headlights face. Buccaneers 17, Panthers 14

CHIEFS AT BROWNS – Josh Cribbs finishes the game in the new Ring of Honor. Browns 21, Chiefs 17

BEARS AT COWBOYS – Jay Cutler is one team’s quarterback. Jason Garrett is the other team’s offensive coordinator. That makes this a battle of half wits. A half wit plus a half wit equals one wit, and Jay Cutler will be the one with more half-witted plays. Cowboys 27, Bears 20

CARDINALS AT FALCONS – An organization of psychiatrists in Arizona sends Derek Anderson a thank you note. Falcons 28, Cardinals 13

STEELERS AT TITANS – There are a lot of bad quarterbacks in the NFL. Vince Young is not one of them. Titans 23, Steelers 10

BILLS AT PACKERS – There are a lot of bad quarterbacks in the NFL. Aaron Rodgers is not one of them. Packers 33, Bills 10

DOLPHINS AT VIKINGS – Brett Favre has a good game and the announcing team weeps tears of joy. Vikings 24, Dolphins 17

RAVENS AT BENGALS – This week, the Bengals learn that the game begins in the first half, Ray Lewis eats eggs from Iowa. Bengals 20, Ravens 16

RAMS AT RAIDERS – Newsflash: Jason Campbell is not a significant enough upgrade to matter. I guess that doesn’t really qualify as news. Raiders 17, Rams 14

TEXANS AT REDSKINS – Everybody loves the Texans this year. I never joined that organization called “everybody.” Redskins 31, Texans 20

SAINTS AT 49ers – The best team in the NFL visits the most dysfunctional team. I think Bill Clinton and George H.W. Bush will be starting a charity for 49ers fans after this one. Saints 51, 49ers 20

This column is sponsored by dumplings.

This article has 10 comments