Inside the museums, infinity goes up on trial

The ancient Mayans and Nostradamus are Cleveland Browns fans who met on Facebook. They went to Applebee’s to predict Super Bowl XLV. They were tied in their fantasy league.

The ancient Mayans used an iPhone prophecy app , common in their time, to predict the outcome of the Pittsburgh Steelers versus the Green Bay Packers. Nostradamus called over the bartender. He ordered a round of beers, sweet tarot cards, and a genuine replica crystal ball. It was sacred religious moment. Sacred secular too. Money was exchanged. 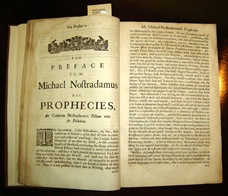 Nostradamus pulled out his iPad and googled “visions.” The bartender brought him a draft Pabst Blue Ribbon. The bartender mistook Nostradamus for a hipster. A gypsy woman brought the tarot cards and a genuine replica crystal ball purchased on eBay. She sat and joined the boys and watched a commercial on the flatscreen TV. Her name was Gypsy Jones.

The ancient Mayans tipped the bartender: “Exercise is good for you,” they all said in unison.

While Nostradamus searched websites for a vision, the ancient Mayans bragged to him of their choice of technology. “The great time-traveling Steve Jobs visited us first,” they said.

“Yeah, he brought you that crappy first-generation iPhone,” said Nostradamus, all snarky like. Suddenly he barked, “I got it! Oh wait. Wrong site. I found the end of the world as we know it.”

The ancient Mayans and Gypsy Jones already knew of the impending demise of the 16-week NFL season. Like all sports fans, they hated knowing about upcoming labor disputes almost as much as they hated

politicians that started predictable wars. They complained of headaches.

Nostradamus guzzled his PBR. He stroked his long gray beard and searched some more. Suddenly he stopped and his eyes teared up. The ancient Mayans and Gypsy Jones rushed to his side. “I am a seer of the Cleveland Browns winning the Super Bowl in the year…” But Nostradamus couldn’t finish. He was overcome with emotion. He added, simply, “I have discovered Whatzgonnahappen.”

PREGAME: Keith Urban tweets a duet with fans on smartphones around the world. Christina Aguilera sings the National Anthem, but when she gets to the line, “the home of the brave,” Maurice Jones-Drew runs on the stage like Kayne West and asks if she means Jay Cutler too?

COIN FLIP: “Hold on,” says the referee. “We’re trying to borrow a coin from China.” When they finally locate a coin, both Clay Mathews and Troy Polamalu call “Hair.” Packers ball, by a hair.

FIRST QUARTER: Aaron Rodgers drives the Packers to the Steelers 20 and then tosses an interception to Polamalu. Ben Roethlisberger can’t be found at the beginning of the game because he’s in the bathroom with a Dallas Cowboys cheerleader. Standing guard outside the bathroom is Brett Favre. Commissioner Roger Goodell suspends Big Ben for the first six minutes of the game. When Roethlisberger returns, he proves adept at handing the ball off to Rashard Mendenhall. Packer 0, Steelers 7

SECOND QUARTER: Aaron Rogers hits the fleet and sure-handed B.J. Raji on a deep out pattern for 25 yards. On the next play as Donald Driver crosses the middle, James Harrison tries to give a clinic on helmet-to-helmet hits. But the receiver quickly and legally (like the Chad Johnson/Ochocinco/Johnson) changes his name to “Donald Duck.” In fact, the Packers score two touchdowns and a field goal, mostly on the arm of their quarterback. James Starks discovers that a Steel Curtain has descended. Meanwhile, Roethlisberger hates long-haired blond linebackers. Packers 17, Steelers 10

HALFTIME: The Black-Eyed Peas dedicate their hit, “Let’s Get Retarded” to the First Amendment, the Tea Party, everyone waving a Terrible Towel.

THIRD QUARTER: After taking the kickoff to the 31, Roethlisberger starts throwing to tight end Heath Miller. Someone with a cheesehead commences nervously eating their hat. By the time Hines Ward catches a two-yard touchdown pass, the hat is gone. There is only a cracker. At this point, defense takes over for both teams. Just before the quarter ends, Brett Favre tries to sneak into the Packers huddle wearing a Groucho Marx nose and glasses. Packers 17, Steelers 17

FOURTH QUARTER: Fox shows a promo for their reality show, “Bart Starr Punches Terry Bradshaw in the Nose.” John Madden returns for a cameo: “Pow!” he says.  On the field, the game turns into a battle of field position and stalling offenses. Each team punts three times. Each team misses one field goal. It is time to test the new overtime rules.  Packers 17, Steelers 17

OVERTIME: The Steelers get the ball first and drive to the 18. On fourth and 4, the Steelers kick a field goal and Ben Roethlisberger starts yelling, “I’m going to Disney World!” But Ben wasn’t on the active roster when the team explained the new overtime rules. After a touchback, the Packers start at their own 20 and Rodgers throws four complete passes in a row to drive to the Steelers 20. On each pass, Harrison just misses getting to Rodgers. On each pass, Polamalu just misses an interception. Rodgers is doing it on purpose. He is penalized for taunting. With the ball at the 35, he hits Donald Driver in the back of the end zone. The ball flies one inch over Polamalu’s reach.  Packers 23, Steelers 20

POSTGAME: Brett Favre interrupts the presentation of the Lombardi trophy to announce he is ending his retirement. Bears fan Barack Obama tells the Packers they are not welcome at the White House.

This column is sponsored by Freecheezeburgerz.