First he put me through a series of tests, including the Tide Pod Challenge. No challenge at all. I ate three of them, and washed them down with a Diet Coke, a Whopper and a Big Mac, just as was written on my prescription. 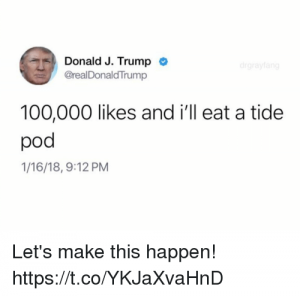 My doctor also gave me a cognitive test. I don’t know that that means. But I am, like, a very stable genius, same as every other sad, pathetic Cleveland Browns fan in the world.

Four teams remain in the playoffs. So I picked another team to win the Super Bowl, and then the doctor, for some reason, ordered the cognitive test.

If ‘cognitive’ means cheering for the Cleveland Browns to win a playoff game this weekend, I passed the test. The fact that they are not playing proves my point. They will not lose.

And speaking of the Fake News Awards – I was, right? – did anyone get a look at the award-winning 2017 NFL standings? The Browns at 0-16? This is why no one trusts the media.

My doctor, a graduate of the Trump University School Of Literary Medicine, is so successful that he recently went from renting a unheated apartment over billiards hall to owning 10 oceanfront houses frequented by Russian “models.”

Even better, my doctor doesn’t like poor people. Right? 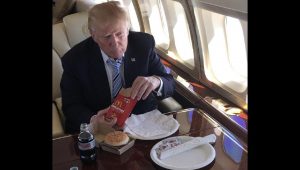 I mean, except for poor Cleveland Browns fans who, even if they have lots of money, are spiritually poor and living in emotional poverty.

Let’s not mince words, or be snowflake politically correct. The Cleveland Browns are a shithole organization that was just given a parade for its suckiness. Professional football players getting paid millions of dollars to lose every game, just like you or I could, have feelings and they were sad about the parade.

The perfect season parade, sadly, was not my idea, proving even I have room to cognitively improve. Of course, I won’t. You already knew that’s whatzgonnahappen.

JAGUARS AT PATRIOTS – Tom Brady has his right hand amputated in the first half but is still able to throw one touchdown with his left hand. Brady’s personal trainer and TB12 business partner, Alex Guerrero, recommends 30 minutes of rest after halftime, and an advocado rub. Bill Belichick turns to new hero, Brian Hoyer to rally the team to a win. Patriots 34, Jaguars 27

VIKINGS AT EAGLES – There is a school of thought that Nick Foles is a tall Case Keenum. But I think it’s more like Nick Foles is a better version of Brock Osweiler while Case Keenum is a downgrade from Drew Brees. I’ll take the Brees downgrade, and the Vikings defense all the way to the Super Bowl. Vikings 23, Eagles 13

BYE AT BROWNS – At several national publications and websites, an editor is already planning a 2021 long piece looking back at this Browns draft wondering, “How Did the Browns Manage To Screw Up The 2018 Draft?”

This column is sponsored by Incoming Ballistic Missile Alerts.