I did not want to climb up this damn mountain for your Super Bowl XLVIII pick. I am guru-phobic. Plus I am scared of heights, which is why I choose not to participate in the Olympics.

I had just taken a sip of tea when Maharishi Richard Sherman told Erin Andrews that he is the best guru in the world. That is why I climbed this mountain to ask the guru, “Which team will win Super Bowl XLVIII?”

The guru said that I should not try him with such a sorry question, and then he yelled, “Don’t you ever talk about me!”

Visiting a guru on a mountaintop is the last place I expected to be. But after I by-mistake stole a fortune teller’s tea leaves because I was craving tea, she put a curse on me – which is why I root for the Cleveland Browns, instead of the Denver Broncos or Seattle Seahawks.

I had a couple of solid backup plans. Not on the Cleveland Browns thing. That curse is real, just like tea addiction.

But when the fortune teller refused to reveal the details of Super Bowl XLVIII without her tea leaves, I wasn’t worried because I was positive that my crystal ball would work. Or my time machine. I felt confident, from previous experiences at Walmart and Target, that these products would work for a solid two weeks, maybe three.

The problem with having a lot of tea leaves, though, is that you inevitably throw a tea party and the next thing you know you find yourself hanging out with the kind of people who go to a tea party.

You see, the reason I am here on this mountaintop is that my crystal ball was borrowed by my tea party friends, who smashed it to pieces in order to prove how much they loved it. My other tea party friends convinced me to tune my time machine into Fox News, which kept sending the time machine straight to Armageddon. I had to put the thing in a junkyard.

Tea is very dangerous, a gateway drug. That’s how I ended up at that gateway to the top of the world talking to a self-confident guru.

I did get an answer, after he processed my credit card and did a touchdown dance. And I knew he really was the best guru in the world when he said, “How the hell would I know whatzgonnappen?”

BYE AT BROWNS – The Browns announce that all coaching decisions this year will be made by a vote on Twitter. In related news, Mel Kiper’s projected “Mr. Irrelevant,” the projected final pick in the seven-round NFL draft, begs the Browns not to draft him.

The match-up is pure cliché. The best offense versus the best defense. It is a live violent video game, where there’s so much good violence that it’s easy, during breaks, to sell all violence. That’s why Seawhawks versus Broncos is America’s marketplace of violent ideas.

But in football terms, it has been pretty clear to most everyone, but me, for quite a while that these two teams were on a collision course from early in the season.

At different times of the season, each has been its own version of dominating. And the Super Bowl features the best offense versus the best defense, which could be awesome. But the question remains, will Peyton Manning choke in the big game again? Will the weather be a factor?

Or will the power go out?

PREGAME – An opera star will be singing the national anthem – I hope in Italian. The super fun first advertisement is for a violent video game in which contestants are supposed to throw bricks at opera stars.

COIN FLIP – Moving into the modern age, the NFL uses a Bitcoin, which triples in

value while it is in the air. The Broncos win the toss because Peyton Manning’s ability to read a tossed Papa John’s pizza is similar to reading a tossed bitcoin – since both are overpriced and made, essentially, of nothing. After the coin toss, there is an ad for a violent video game in which the object is to kill people by tossing coins at them.

FIRST QUARTER – The kickoff goes out of the end zone and the Broncos start with the ball in Omaha. Before the first snap, Richard Sherman gives the choke sign to Manning,

who graciously asks if Sherman needs help choking. Manning struggles in the first series against Pete Carroll’s “Golly Gee” defense. After trading punts, Manning figures out the best way to attack the Golly Gee defense is with the old “Aw Shucks” play. When Norman Rockwell’s first quarter ends, the Broncos will have scored two touchdowns, and Marshawn Lynch will have scored one. A really fun ad comes on for a violent video game where the object is to kill Norman Rockwell with weapons, such as a cop’s gun, that he once painted. Broncos 14, Seahawks 7

SECOND QUARTER – Wes Welker, saying “this is how Bill Belichick taught me,” runs a pick play at Richard Sherman, who avoids the pick and gives Welker the choke sign.

But Welker sets his own hair on fire when he keeps crossing the middle for eight yard pickups. It’s great until the red zone, which is a red light zone, and the Broncos settle for a field goal. As Marshawn Lynch wears down the Broncos defense, they seem to forget that Russell Wilson is allowed to throw the ball. Wilson hits Golden Tate to make the game tight at halftime. The cool ad here is for the violent video game where the object is to be an NFL player, and a serial killer. The game is called “Aaron Hernandez.” Broncos 17, Seahawks 14

HALFTIME – Russell Wilson receives a call from Johnny Manziel, begging him to win

for short quarterbacks everywhere. Peyton Manning receives a call from Tom Brady, begging him to lose Brady’s legacy. Bruno Mars receives a call from Mick Jagger, asking, “Who are you?” The halftime ad for a violent video game features you as Progressive’s Flo roasting and eating the Geiko gekko, and you have to decide whether to chase him with a Bud Lite or Coors Lite. 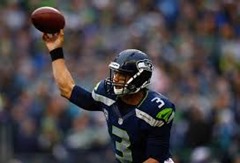 Demaryius Thomas. Peyton smiles and says, “I wasn’t talking about you.” After the Seahawks get the football, Marshawn Lynch proves how big he is by powering the team across the field. But when the Seahawks need a big play, Russell Wilson proves that he is shorter than he is tall when his third down pass is batted down. The Seahawks kick a field goal. At the end of the third quarter, there is an ad for a violent video game in which you are given people’s phone numbers and locations from the NSA, and you have to kill them in the bloodiest way possible. Broncos 24, Seahawks 17.

quick field goal, cutting the score to Broncos 24, Seahawks 20. So close, yet so much Peyton Manning yet to go. And this is Manning’s Sinatra moment, a perfect 80-yard drive that brings to mind every thing admirable about Peyton. He is literally a Limo-billy, the high-class hillbilly oxymoron we all love more than most other morons. Wes Welker catches the final touchdown, and Peyton under a sea of confetti announces that his only goal left in life is to win a Super Bowl for the Cleveland Browns. The final violent video game advertised is one in which you become a guru by killing the dreams of Cleveland Browns fans. It has been called the most graphically sad game ever invented. Broncos 31, Seahawks 20

—
This column is sponsored by Cold People For Global Warming