Jesus Christ, Superstar
Do you think you’re who they say you are?
– Tim Rice

Rick Perry, dressed in a Tim Tebow jersey for the Halloween GOP debate, proclaimed his  week 8 NFL picks to be his economic plan. “Trick or treat,” he said. A choir brandishing handguns and wearing New York Jets helmets sang holy halleluiahs behind him. Perry said he would choose Rex Ryan as his running mate.

Michele Bachman only wanted to talk about Tim Tebow. She declared that Tebow was her personal savior in her fantasy football league. Bachman said her belief in Tebow would always guide her NFL picks once she moved into the White House and painted it to look like Tebow’s #15 jersey.

Herman Cain, wearing a customized 9-9-9 Tebow Jersey, declared that week 8 in the NFL is like apples compared to week 9, which is like oranges. Then he said that Tim Tebow is like pizza.

Every Republican at the debate, with the exception of Ron Paul, 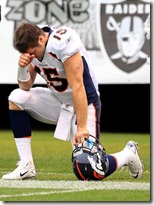 Mitt Romney wore a Tebow jersey, but underneath it he wore an Kyle Orton jersey just in case he needed to change his mind again. Newt Gingrich asked people to buy his new book about Tim Tebow. Jon Huntsman said something but no one paid attention to anything except that he, also, wore a Tebow jersey.

Ron Paul smirked and said that, “It’s time for you people to face reality. Tim Tebow is not a viable NFL quarterback.”

VIKINGS AT PANTHERS – I was going to study hard and come up with an educated prediction for this game, but Donovan McNabb suggested I just wing it. Panthers, 27, Vikings 20

SAINTS AT RAMS – The Saints score 50 points by halftime and declare the second half to be an extra bye week. Saints 50, Rams 14

BYE AT FALCONS – Tony Gonzalez catches a cab. Then he catches a movie.

COLTS AT TITANS – The Colts are winning until the last seconds when Jim Irsay calls the Buffalo Wild Wings hotline to keep him in the hunt for Andrew Luck. Titans 21, Colts 20.

CARDINALS AT RAVENS – The occupy Ray Lewis movement has a casualty. Kevin Kolb could be called that as well. Ravens 27, Cardinals 16

DOLPHINS AT GIANTS – Eli Manning looks at the schedule and sees this week’s game printed on a big cardboard check. Yes, he is a sweepstakes winner. Giants 23, Dolphins 17

JAGUARS AT TEXANS – Maurice Jones Drew versus the Houston Texans. Is that fair? Texans 27, Jaguars 17

BYE AT PACKERS – The best team in the NFL has very impressively avoided the cliché Super Bowl hangover.

LIONS AT BRONCOS – Ndamukong Suh is Tebowing after every sack. Lions 34, Broncos 10

REDSKINS AT BILLS at TORONTO – Ryan Fitzpatrick will have a big day and the Bills should win by 10 or so, depending on the cross-border touchdown exchange rate. Bills 30, Redskins 20

BYE AT JETS – Rex Ryan takes over as CEO of Apple and invents the iMouth, which tells Rex Ryan that he could have done anything he hasn’t done.

PATRIOTS AT STEELERS – Bombs away in a fun shootout. Patriots 45, Steelers 41

BYE AT RAIDERS – After last weeks’ debacle, the Raiders try something different. They introduce the quarterback to the team before the next game. “This is Carson. Everyone say ‘hi’ to Carson.”

BENGALS AT SEAHAWKS – Andy Dalton has a nightmare game when it suddenly dawns on him that he is a Bengal. Seahawks 23, Bengals 6

COWBOYS AT EAGLES – DeMarco Murray will have some big plays the but Eagles will have more. And Tony Romo will flounder while Michael Vick finishes. Eagles 27, Cowboys 22

CHARGERS AT CHIEFS – It’s always tough to play in Kansas City but the Chargers are due to explode. Chargers 35, Chiefs 24

This column is sponsored by the bottom 99 percent of the top 1 percent.
See briantarcy.com