Week 1 NFL Picks By Clint Eastwood And A Chair

Said there ain’t no use in crying
Cause it will only, only drive you mad
Does it hurt to hear them lying?
Was this the only world you had?
– Led Zeppelin

These week 1 NFL Picks will now be ad-libbed by Clint Eastwood and a chair as if they were written by the Founding Fathers.

Clint Eastwood:     One of the founding fathers, Ben Franklin, George Washington or Ronald Reagan, wrote this. I mean, I know what you are thinking. You are thinking, Look, he has a chair. 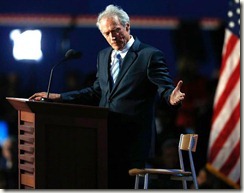 But this isn’t just a chair. Roger Goodell is sitting in it with a replacement referee sitting on his lap. I remember when Mr. Goodell was made NFL Commissioner and there was all sorts of hope and change. I thought this is great. Oprah is crying. I was even crying. He was a real sheriff.

Oh you said you’d be fair to the Saints, but where’s the evidence Mr. Goodell? You have evidence on the Saints, but you won’t show the evidence – or something like that. I don’t know. I heard something that might be true. I know there is a version of the truth out there that I like, and it makes me mad that Commissioner Goodell is too blind to see what I want to see. Scott Fujita, suspended for three games, plays for the Browns now and so he should be pardoned immediately.

I like to fire people. I mean, I like to fire at people, I mean I am fired up for the Cleveland Browns season. I am studying to become a born-again Mormon, and I want to marry a corporation as soon as the Church of Latter Day New Orleans Saints accepts me. I think I want to marry Apple, or maybe Sherwin Williams.

I know what you are thinking. Will the Cleveland Browns win five games or six this season? Well, to tell you the truth, in all this excitement, I’ve kind of lost track of my pick myself. I am pretty sure it was more than five or six. But being this is a 16-game season, and the NFL season is the most awesome sports season in the world that can literally blow your head clean off, you’ve got to ask yourself this one question, do I feel lucky? Well, do you punk? You actually think the Cleveland Browns are not going to be the best team in the NFL this year? Go ahead, make my day.

Finally, I would like to offer a brief quote you can take out of context and then base your campaign, signs, and slogans around. Here’s whatzgonnahappen.

COWBOYS AT GIANTS – Even when the Giants are great, they are only great when it really counts. Sure game 1 counts in the record. But it’s not a playoff game. Cowboys 30, Giants 17

COLTS AT BEARS – Interesting and tough place for Andrew Luck to start his career. But until proven otherwise, I choose to believe he could have a Marino-like early career. Bears 27, Colts 17

PATRIOTS AT TITANS – Jake Locker has a good early game drive and then mistakes lead to Tom Brady doing what he does. Patriots 28, Titans 13

REDSKINS AT SAINTS – Drew Brees, much like Clint Eastwood, brings an empty chair into the huddle and talks to Roger Goodell before every snap.  Saints 30, Redskins 20

FALCONS AT CHIEFS – Peyton Hillis runs like a guy who deserved to be on the cover of Madden, not the guy who was cursed. The curse only lasts a year. Chiefs 25, Falcons 16

DOLPHINS AT TEXANS – Last year was supposed to be the Super Bowl year, not the year of T.J. Yates. Texans 28, Dolphins 12

49ers AT PACKERS – The 49ers have added Randy Moss so they should be even better than last year. But Aaron Rodgers and the Packers are the most legitimate powerhouse in the NFL. Packers 26, 49ers 20

SEAHAWKS AT CARDINALS – In recent years, Drew Brees and Michael Vick are the model for a small quarterback. Colt McCoy got a chance. Now it is Russell Wilson’s turn to fight the stereotype. On the other hand, John Skelton is a game manager. Cardinals 23, Seahawks 9

PANTHERS AT BUCCANEERS – Cam Newton one year better is going to be fun to watch and scary to play against. Panthers 20, Buccaneers 12

STEELERS AT BRONCOS – On the first play, James Harrison hits Peyton Manning late, and then he Tebows next to Manning. Broncos 21, Steelers 18

BENGALS AT RAVENS – Andy Dalton to A.J. Green, and then he does it again. Ray Lewis vacations on Cape Cod and is eaten by a shark that thinks he tastes like seal. Bengals 23, Ravens 17

CHARGERS AT RAIDERS – Interesting game. The Chargers remain, somehow, legitimate and, more surprising, the Raiders are too. Chargers 28, Raiders 20

—
This column is sponsored by Gin and Donuts.