You are not getting week 1 NFL picks from Colin Kaepernick until the Cleveland Browns are treated better by the rest of the league.

Look, I know you came here for NFL picks. I can hear the National Anthem as a prelude to the start of the picks. But my brain is in no better shape than Teddy Bridgewater’s knee. 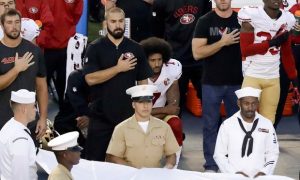 My brain suffered a non-contact injury thinking about the presidential election. It was after my injury that I thought those pig socks were a good idea.

Still, I am glad you are paying attention to me. And I know you want me to protest in a different manner – a manner in which you wouldn’t have to pay attention.

But as I told Hillary Clinton in an email, receiving $12 million to play backup quarterback is my own hardship. But this isn’t about me or any of the clandestine Goldman Sachs work that I’ve done for the Clinton Foundation.

This is about the abuse of lesser teams in our league.

Sure, my 49ers are just as woeful as the Cleveland Browns. I don’t care at all about that. If we can’t make the Cleveland Browns great again, what’s the point of my being a double agent for the man who is as orange as the Browns helmet, Donald Trump?

Yes, that is right. Just as I am half black and half white, I am working for both Donald Trump and Hillary Clinton because, with these two as our choice, no lives matter. And the truth is that every day, like you, I change my mind on who I dislike more.

It’s like trying to pick a Cleveland Browns starting quarterback. There are no good choices and no matter what you do, you know the season is going down in screaming ball of flames.

This is why I am more concerned about the Browns than the 49ers.

If I was concerned about the 49ers, I probably wouldn’t be the lead story on the CBS Evening News. Instead, I am concerned about America – specifically the portion in Northeast Ohio.

Since we are in the season of conspiracy theories, try this one on: I am hoping to force my way out San Francisco so I can go to Cleveland and become the Browns next failed starting quarterback. Pretty good, huh? Someone call Alex Jones.

The National Anthem just ended. It’s time for me to stand up and tell you one more conspiracy theory. When I was working for Trump, I helped Tom Brady deflate those footballs. Then I worked for Clinton and told Roger Goodell.

That’s when he laughed and said, “You’re not going to believe whatzgonnahappen.”

This column is sponsored by the Roger Ailes Charm Society.