Oh, a storm is threatening
My very life today
If I don’t get some shelter
Oh yeah, I’m gonna fade away
– The Rolling Stones

These Week 10 NFL Picks voted for Donald J. Trump because the Cleveland Browns have not won a game all year.

You should have known how desperate we are here in Ohio when we took a baseball guy and put him in charge of our football team. We are willing to try crazy, and at this point we don’t care what anyone thinks.

This was a vote with our middle finger. No, we didn’t think it though. Except for the middle finger part. We’ve been pondering that for decades.

The elitists on the east coast and the west coast with their real NFL teams that win actual NFL games look down on us as flyover territory as they look down on the Browns as a walkover team.

This is a depressed area, and no one has paid attention for a couple of generations. We especially don’t care what anyone using the condescending ‘rest belt’ metaphor has to say about this place that once had a great football team to root for, and is now reduced to cheering for the disaster that is the modern Cleveland Browns.

So to get revenge, we paid extra close attention to this election and then decided to ignore many, many facts because, well, our middle finger is about the only thing we have left to say.

Nothing worked. Same with our economy here. Democrats. Republicans. Once every four years, what you call the rust belt is important for a minute because maybe there’s a Super Bowl team from Green Bay or an election,  and then we are fodder for comics. Well guess who’s laughing now.

Okay, we’re not laughing either. We just realized what actually happened. 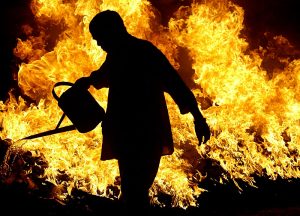 Do we believe Donald J. Trump can fix everything? No. But we’ve been devastated by trade agreements here. Have you heard of Johnny Manziel?

Sure, many of the things Donald Trump says are deplorable. And, in fact, a lot of other people who voted for him really are quite deplorable. But not us. All of our friends, who look very much like us, tell us so.

All this talk completely misses the point. Many of our jobs have left. Once, even our NFL team left.

Ignoring us for decades has led us to do something so crazy that it made sense until now, when it’s too late and we actually think about whatzgonnahappen.

This column is sponsored by Glass Ceiling Insurance.