These Week 10 NFL Picks from the campus of Cleveland Browns University demand that everyone step down who runs this sorry excuse for a college. I have been here for decades, and I have not learned anything. 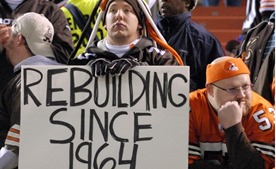 From what I have heard, they don’t like to play football.

So I talked to my bartender/professor about this. Here at Cleveland Browns University, bars count as classrooms.

This explains the curriculum.

My professor said “It is what it is” and then he assigned me to think about this for a long time.

But I felt a need to take action, which is why I am chanting next to that guy over there with his 12th-generation “The End Is Near” sign.

BILLS AT JETS – The guy commissioned to make a Rex Ryan statue moved from New York to Buffalo, but he is still working on the feet. Bills 22, Jets 17

COWBOYS AT BUCCANEERS – Greg Hardy sings the Rod Stewart song, “Every Picture Tells a Story, Don’t It” while sacking Jameis Winston. Matt Cassell is not horrible, which is good enough. Cowboys 26, Buccaneers 14

PANTHERS AT TITANS – The Panthers were patient with Cam Newton, and now it is paying off. Panthers 31, Titans 11

BEARS AT RAMS – The Rams defensive line are in a Thanksgiving mood by getting to feast on Jay Cutler. Rams 20, Bears 19

DOLPHINS AT EAGLES – In the week to week reactions of the NFL media, Sam Bradford is now Johnny Unitas. Or wait, is Dan Campbell now Don Shula? I can never remember. Eagles 30, Dolphins 24

BROWNS AT STEELERS – The Browns drive into Pittsburgh with 53 limos, each painted a different color and each arriving at a different time. Mike Pettine organized this. Meanwhile, Johnny Manziel interprets “playing from the pocket” as playing from the seat of his pants. Browns 50, Steelers 0

JAGUARS AT RAVENS – The Ravens defense makes Blake Bortles look good. Try that at home, the Ravens do.. Jaguars 31, Ravens 21

CHIEFS AT BRONCOS – The Broncos go from invincible to very vincible. Chiefs 28, Broncos 22

PATRIOTS AT GIANTS – Patriots receivers apply stick-em to their helmets so that every catch in the game is David Tyree style, because karma is a bitch this year. Brady has a great day throwing at helmets. Patriots 38, Giants 23.

CARDINALS AT SEAHAWKS – It’s the kind of season that has Pete Carroll remembering how much fun he had at USC. Cardinals 23, Seahawks 21

BYE AT FALCONS – After losing to the Buccaneers and 49ers in consecutive weeks, players are told it is okay to make personal plans during Super Bowl week, and most likely during the playoffs.

BYE AT COLTS – Andrew Luck starts thinking about what coach he’d like to hire for next year.

BYE AT CHARGERS – Everyone spends the week packing for Los Angeles.

BYE AT 49ers – Thankfully for the 49ers, San Francisco is a sanctuary city.

This column is sponsored by Ben Carson’s Bible (he wrote it).