These week 13 NFL Picks put on a this cool blue uniform to give thanks for not being charged by a grand jury for picking the Cleveland Browns to win the Super Bowl for each of the last 15 years.

I admitted to it, and there is evidence all over the place that it happened. 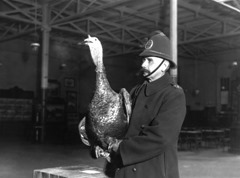 But the grand jury in its wisdom decided that I picked the Browns to win all those Super Bowls in self defense. I said that I had no choice, and they chose to believe me because I have a cool blue uniform. I couldn’t believe it. I told them that each time I fired off a Super Bowl prediction, I felt that my life was in danger because the season was charging at me.

So you know what I did this year, don’t you? I picked the Cleveland Browns to win the Super Bowl again because, screw it, I can do whatever I want. Sure, there are witnesses who saw me pick the Browns all those other years. So?

I did it again because I claim I was scared when I did it. The season was charging at me like a demon.

Did you see how I used the words “charging at me” with such effect? I’ve learned if you use those words and you wear a cool blue uniform, you can do whatever you want.

BEARS AT LIONS – I will watch this game while eating a turkey, mashed potatoes, stuffing, gravy and cranberry sauce appetizer and then watching as Jay Cutler turns into a turkey while I have my pumpkin pie appetizer. Lions 30, Bears 17

EAGLES AT COWBOYS – For my main course, I will have turkey, mashed potatoes, stuffing, gravy and cranberry sauce.. On one side of this game is Jerry Jones. On the other is Mark Sanchez. Even if I draw with a crayon around my hand, I cannot create two more realistic turkeys. Cowboys 31, Eagles 21

SEAHAWKS AT 49ers – Pumpkin pie piled high with Ice cream made from turkey, mashed potatoes, stuffing, gravy and cranberry sauce sounds good for dessert, especially when watching these two teams try to freeze each other out of the end zone. 49ers 13, Seahawks 10

BROWNS AT BILLS – After the contents of Lake Erie were dumped on Buffalo in the form of snow, the Bills return home to face the Browns. Brian Hoyer is stuck in traffic and shows up for only the final 44 seconds. Browns 20, Bills 17

CHARGERS AT RAVENS – The Chargers, at this point in history, should not even be required to travel east. Just give them a loss, save the gas. Ravens 27, Chargers 20

GIANTS AT JAGUARS – I want to sit next to Odell Beckham Jr. at Thanksgiving because I know when he passes the gravy, he will not drop it. Giants 19, Jaguars 9

RAIDERS AT RAMS – Both of these teams used to play in Los Angeles, and somehow that makes this game interesting. I hate what Hollywood puts out these days. Rams 19, Raiders 18

BENGALS AT BUCCANEERS – A 1 PM game that is not on national TV against a bad team is about the only way to bet on the Bengals. Still, this feels like a trap game. Buccaneers 23, Bengals 16

SAINTS AT STEELERS – The Saints are probably going to make the playoffs by continuing to do what they will do this Sunday, lose on the road. Steelers 31, Saints 24

CARDINALS AT FALCONS – A battle of first place teams has never looked quite like this. Cardinals 29, Falcons 17

BRONCOS AT CHIEFS – Peyton Manning is aging in recent weeks in ways that Tom Brady did earlier in the year. While the Chiefs loss to the Raiders was embarrassing, the loud crowd fixes the wound. Chiefs 26, Broncos 23

DOLPHINS AT JETS – With nothing to lose, Rex Ryan gives Joe Namath a uniform, a bottle of vodka, and a playbook. He hires Suzy Kolber as offensive coordinator. Dolphins 22, Jets 6

This column is sponsored by gravy.