These Week 15 NFL Picks are smaller than any accusations about us – whether by Marvin Lewis or Diane Feinstein. We are small just like our heroes, Johnny Manziel and the CIA.

Sure, we are exciting. But that’s because we are sneaky and slippery – and made for Hollywood. Just like Johnny Manziel, and the CIA. 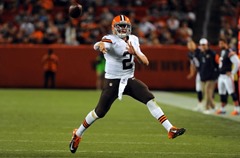 Yes, news is out that we have tortured our opponents, just like Manziel did in college and the CIA did a decade ago. While the CIA is saying it does not torture any more, and many are saying that Manziel can’t torture anyone in the NFL, we say torture by the arrogant and disrespected is, quite frankly, to be expected.

In his own words, Johnny Manziel has said (well, texted) that he’s going to “wreck this league.” And that was before Marvin Lewis made light of Manziel’s shortish stature. So guess who gets wrecked first.

And the CIA, whose primary job used to be to lie, is saying they don’t torture. So that’s believable, right?

Everything the CIA does is with the justification of stopping a hypothetical ticking time bomb. Johnny Football is no longer hypothetical, and when he throws bombs to Josh Gordon, the enemy is expected to be fearful about whatzgonnahappen.

CARDINALS AT RAMS – In an NFL season, teams turn into what they are. Early on, the Rams defense stunk, but it’s actually good. And the Cardinals? Well, they are the Cardinals. Rams 23, Cardinals 17

TEXANS AT COLTS – While you may think this game is about Andrew Luck versus Ryan Fitzpatrick and will be a blowout, it’s actually much closer when you think about it as Luck versus JJ Watt. Colts 30, Texans 24

PACKERS AT BILLS – The Packers defense is vulnerable and this feels almost like a trap game. Almost. Packers 24, Bills 23

BUCCANEERS AT PANTHERS – Josh McCown versus Derek Anderson, and the game means something! Panthers 20, Buccaneers 17

BENGALS AT BROWNS – The race is on between Johnny Manziel and his buddy, Lebron to see who can bring the first championship to Cleveland since middle-aged men were little boys. All are begging Bieber to stay away. Browns 40, Bengals 20

STEELERS AT FALCONS – Ben Roethlisger asks the media not to call him Big Ben anymore. Instead, he wants to be called by his new nickname, Fat Albert, in honor of his hero, Bill Cosby. Falcons 34, Steelers 27

DOLPHINS AT PATRIOTS – This is a message game from Bill Belichick, Tom Brady, and Darrelle Revis. Patriots 31, Dolphins 14

RAIDERS AT CHIEFS – Even when the Chiefs are struggling, it’s still tough for a high school team like the Raiders to win in Kansas City. Chiefs 19, Raiders 16

BRONCOS AT CHARGERS – I cannot understand the Chargers, while the Broncos are already planning how to get past the upcoming playoff loss. Broncos 20, Chargers 19

JETS AT TITANS – To improve ratings, the NFL announces the fourth quarter will be played on Madden by two randomly drawn fans. Titans 10, Jets 9

VIKINGS AT LIONS – The curse of Fauria’s twerk is now in motion, so to speak. If the Lions had ever been good, it would become as famous as the curse of the Bambino. Vikings 23, Lions 20

COWBOYS AT EAGLES – Tony Romo, AKA Mr. November, plays as if he still has a turkey leg in his hand. Cowboys 33, Eagles 23

SAINTS AT BEARS = The Saints in Chicago in December? That’s hilarious. Bears 30, Saints 17

This column is sponsored by Overdue Rent On Dick Cheney’s Undisclosed Location.