These week 17 NFL Picks would like you to duck back to an ignorant age when everyone knew their place. Back then, the Cleveland Browns place was first. That’s right, a long time ago.

Quack. I’ve got a beard and money. I am the smartest person I’ve ever met  Plus, get this, I’ve read one book. 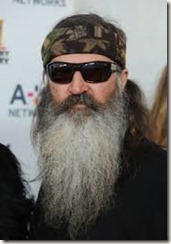 Please say “amen” now. And listen to my call.

Actually the duck call that you ordered, engraved with the Cleveland Browns logo and the Lombardi Trophy, is late because the logistics of UPS were messed up by the credit card you gave to Target after you told them you worked at McDonald’s but needed therapy because you sold burgers that your boss told you not to eat under any circumstances short of starvation.

The NSA told me that. Yes, they report to me. Only me, the guy who looks like the leader of Al Qaeda.

So don’t complain about your missing duck call, goddam it. It’s your fault.

But most damning is that you once masturbated – the NSA has proof – therefore you were at that moment super gay for touching someone of your own sex, and thus you are a sinner who should die. I bet you will. But I can only dream of someday.

Speaking of someday, or Sunday, after I go to church and pray that a good percentage of the population be damned to hell, I always come home, eat chicken, and watch football.

PANTHERS AT FALCONS – Superman is a better nickname than Matty Ice, who this year, is more like Matty Slush. Panthers 27, Falcons 21

PACKERS AT BEARS – Whether Aaron Flynn or Matt Rogers, it doesn’t matter. Not against Jay McCown or Josh Cutler. Bears 24, Packers 22

TEXANS AT TITANS – The Texans are going to draft Jadveon Clowney with the number one pick in next year’s draft. Titans 24, Texans 17

BROWNS AT STEELERS – Realists say the hopeful Steelers are going to destroy the hopeless Browns. But I am trying to think of this game in more like an impressionist, or maybe Picasso cubist painting in which you lose sense of reality. Browns 50, Steelers 10

REDSKINS AT GIANTS – In years Eli Manning does not win a Super Bowl, he is below-average NFL quarterback. Redskins 20, Giants 13

RAVENS AT BENGALS – The Bengals don’t lose at home, and the Ravens don’t go to the playoffs. Bengals 27, Ravens 12

JAGUARS AT COLTS – Early in the first quarter, Trench Richardson rips his highlight reel play of the year, a huge gain of 3 yards. Andrew Luck understands his role. He must rescue the team, again. Colts 24, Jaguars 23

JETS AT DOLPHINS – As the game ends, Rex Ryan moons the crowd. He gives the finger to the Jets owner’s box. After urinating on the 50-yard line, he says, “I think I did a swell job this year.” Dolphins 31, Jets 6

LIONS AT VIKINGS – Adrian Peterson runs for 175 yards against a Lions team that is lost on a UPS truck that was run by crappy logistics. Vikings 33, Lions 17

BILLS AT PATRIOTS – It’s going to be fun watching the Patriots get ready for the playoffs against the Buffalo Bills. Patriots 51, Bills 20

BUCCANEERS AT SAINTS – One team is at home and motivated and the other team is dreaming of golf, or probably in a lot of roster spots, selling insurance. Saints 24, Buccaneers 13

BRONCOS AT RAIDERS – Terrelle Pryor outplays Peyton Manning, who is contemplating the option of a one-and-done playoff run. Raiders 27, Broncos 23

CHIEFS AT CHARGERS – Chiefs rest, Chargers are best. You know it, I am a poet. Chargers 31, Chiefs 21

RAMS AT SEAHAWKS – The 12th man gets fired from all jobs in Seattle on Monday. I’ve moving to Seattle to sell coffee! Seahawks 30, Rams 10

EAGLES AT COWBOYS – The off-season dilemma for Jerry Jones – only one facelift allowed, Jerry Jones or the Cowboys. Either way, it’s ugly. Eagles 34, Cowboys 13

This column is sponsored by old acquaintances forgotten.