These week 17 NFL Picks have hacked the NFL standings and now the Cleveland Browns are undefeated. Yeah, we’re crazy serious!

We can do anything. Johnny Manziel is now officially a giant among men. That’s right. Don’t mess with us!

So Patriots fans, Seahawks fans, Packers fans…. sorry, but your Internet is down. Plus, and this is crucial for understanding us… We love exclamation points!

Here is a picture of Otto Graham. 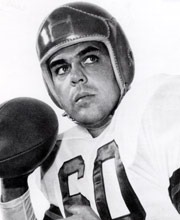 Use google, you doofuses! You’ll figure out that great football is Cleveland Browns football. Nothing else matters, certainly not the movie, “Draft Day,” which we should have hacked. But we like the movie, “Giant” because it is about Johnny Manziel.

One more thing. Happy Holidays. Sorry but nothing that you got for Christmas works. Certainly not Johnny Manziel!

And another thing. We’re not North Korean and the Browns aren’t really undefeated. This is  surprising to you, and especially to us.

We are Cleveland-based sports hackers. We can prove it. Although we still don’t have the NFL code figured out, we did the code for Lebron James. You didn’t think that would work, did you?

Okay, that’s not true either. The truth is that we actually work for Justin Bieber. Dude loves vandalism, and he’s a big fan of Johnny Football. He is certain by next year that we’ll have this NFL code figured out.

In one year, Johnny Manziel will lead the Browns to the Super Bowl and Justin Bieber will be the halftime show. This is true. Only a real hack would declare that that’s whatzgonnahappen.

BROWNS AT RAVENS – This is such a mismatch, someone should call in NATO. The Ravens have no answer for Connor Shaw, my new favorite Cleveland Brown ever. Browns 31, Ravens 20

JAGUARS AT TEXANS – Expanding his sports, JJ Watt hits for the cycle and he also has a triple double. Texans 24, Jaguars 13

BILLS AT PATRIOTS – Tom Brady plays the first half. Jimmy Garoppolo looks like the best quarterback of the last draft. Patriots 29, Bills 17

EAGLES AT GIANTS – If only the year began every year in December for the Giants. If only it ended in late October for the Eagles. Giants 26, Eagles 13

COWBOYS AT REDSKINS – Despite one decent game, the Redskins are still the Redskins. And the Cowboy look seriously awesome. Cowboys 36, Redskins 19

LIONS AT PACKERS – It would be so cool to see the Lions go far into the playoffs. Just like it would be fun to have a unicorn. Packers 29, Lions 20

RAIDERS AT BRONCOS – I am always watching for the sky to fall with old quarterbacks. Earlier this year, I saw it falling on Tom Brady. I was wrong. Now I see the sky falling on Peyton Manning. Raiders 29, Broncos 19

BENGALS AT STEELERS – The Steelers are obviously the better big game team. The game is in Pittsburgh. Andy Dalton always chokes. But while I hate both teams, I hate the Steelers more. Bengals 24, Steelers 23

This column is sponsored by old acquaintances I’ve forgotten.