Week 3 NFL Picks From The Leaking Nuclear Reactor Of Sadness

Cryin’ won’t help you, and prayin’ won’t do you no good
When the levee breaks, mama, you gotta move
– Led Zeppelin

So I saw that the Pope said it was okay for the Cleveland Browns to trade Trent Richardson. I smell chemicals. Did Assad hit my living room? That’s not what the Pope said, is it? 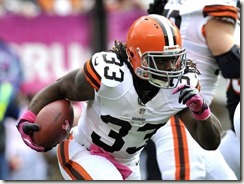 Is this the leak from Fukishima? I’ve been sad from Three Mile Island to Three Rivers Stadium. I’ve got the Fukishima Trent Richardson you-can’t-be-serious-after-everything-I’ve-been-through blues.

Really? After one season and two games, the Cleveland Browns traded Trent Richardson?

Can I swear here? No? (Psst, I hate the bastard that runs this place.)

Let me put it this way: Wah!

Okay. From a logical standpoint, a little nuclear waste is a small price to pay for some really cool mostly invisible and actually green energy. The NFL draft is energy, right?

Of course, there is waste. That’s a fact of nuclear energy or chemical attacks – or, for that matter, Cleveland Browns high draft picks. I smell apathy, and I’m getting sleepy. My stomach hurts something awful, and I want to rip my eyes out. Will the Cleveland Browns move again, this time to Yucca Mountain? Maybe that’s whatzgonnahappen.

CHIEFS AT EAGLES – I am so clairvoyant it’s like I can see this game right in front of me, on television. Chiefs 26, Eagles 16

TEXANS AT RAVENS – By the end of the game, JJ Watt spends so much time with Joe Flacco that he gets Flacco to join him as his partner on on “Dancing With The Stars.” Texans 31, Ravens 14

CHARGERS AT TITANS – As much as I want to believe in San Diego and I don’t believe in Tennessee, I’ve never believed that San Diego travels well. Hard to blame them. It’s really nice in San Diego. Titans 24, Chargers 21

CARDINALS AT SAINTS – The Cardinals are suddenly a good test, and the Saints easily pass the test. Here come the Saints. Saints 29, Cardinals 22

BUCCANEERS AT PATRIOTS – The Patriots last shot at a tomato can for a bit. This time, they make it look easy. Patriots 33, Buccaneers 10

BROWNS AT VIKINGS – Take out your journal. Take a photo of yourself. For the rest of your life, you will remember where you were when the Brian Hoyer era began for the newest NFL dynasty. Plus, Willis McGahee is the best running back in this game. Let the dominance begin. Browns 3, Vikings 0

GIANTS AT PANTHERS – Fantasy Cam is back for this game. Panthers 23, Giants 21

PACKERS AT BENGALS – Aaron Rodgers is ridiculously good at what he does, which is throw the football. Packers 31, Bengals 20

RAMS AT COWBOYS – Dez Bryant hitting his prime can’t be fun for opponents. Especially when regular-season (as opposed to playoff) Tony Romo is throwing the ball. Cowboys 24, Rams 20

FALCONS AT DOLPHINS – Every year, some team that has no right to have a great record starts the season with a great record. Meet the 2013 Miami Dolphins, benefiting from a hurting, cautious Falcons team. Dolphins 23, Falcons 20

BILLS AT JETS – Geno Smith throws a touchdown pass and then smiles at Mark Sanchez. He runs it into the end zone, and he winks at Mark Sanchez. “He’s my bestie,” says Geno. Sanchez says, “I’m still the starter in my mind.” Jets 24, Bills 14

JAGUARS AT SEAHAWKS – Seeing the Browns trade Trent Richardson might make the Jaguars double-down on being the worst team in the NFL. That’s why the Tebow talk continues. Seahawks 61, Jaguars 0

COLTS AT 49ers – The Colts will lose by one point every game this year, giving the Cleveland Browns a very high draft pick for Trent Richardson who suddenly, to my eyes, looks ordinary. The laundry makes the player. 49ers 27, Colts 26

RAIDERS AT BRONCOS – Peyton Manning, because he’s bored, films a television commercial on the third play of each of the four quarters. If he’s selling, I’m buying. Broncos 50, Raiders 20

This column is sponsored by the mind of Senator Ted Cruz.