These week 4 NFL picks went to a tremendous watch party at the Trump Dive Bar on Liar Street in the sketchy fun part of downtown Bullshitville, where I was served a huge Cleveland Browns word salad and Analytics brand baloney.

Right off I agreed with Mr. Trump that the Cleveland Browns have been getting ripped off in trade deals. “The Carson Wentz trade deal was a disaster,” he said. “Wins went over the border into Pennsylvania because our leaders are idiots. It was a huge disaster.”

I was as undecided going into the debate. But Mr. Trump had me with each loud sniffle. His sniffle reminded me of parties I attended in the 1980s with guys just like him. Okay, I didn’t know anyone like him. But in the 1980s, everyone knew someone like him, am I right? 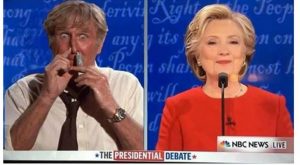 All I remember about that decade is that Browns quarterback was Bernie Kosar, and he was actually good. It all made me think that maybe I picked the wrong decade to quit sniffing what Mr. Trump is maybe still sniffing. But maybe not. He just looked sniffly. Maybe.

I was thinking a lot about sniffing when Lester Holt tried to say that Mr. Trump was in favor of drafting Kellen Winslow Jr. over Ohio native Ben Roethlisberger. Big Ben was drafted by the Browns bitter rivals, the Pittsburgh Steelers, and has become a superstar. Mr. Trump said told biased Lester Holt that he actually supported selecting Big Ben.

Then Crooked Hillary Clinton held up a photo that she claimed got from “another of Donald’s victims.” The photo was of Mr. Trump giving a motorcycle to Kellen Winslow Jr. that Trump signed, “I hope you drafted by the Cleveland Browns instead of Ben Roethlisberger, who is a loser.”

Fact checkers have pointed out that Winslow ruined his knee early in his career in a motorcycle accident.

I believed Mr. Trump. He spoke with passion

You know who else speaks with passion? Hue Jackson, coach of the Cleveland Browns. Trust me, said Jackson. I do. I trust Jimmy Haslam too. I am a good judge of character.

Mr. Haslam and Mr. Trump are at least as ethical as each other, maybe even less so. That’s a lot of ethicalness, am I right?

I wasn’t listening when Crooked Hillary pointed out that Cody Kessler played an entire game for the Cleveland Browns without getting hurt, proving that analytics work. “I received an email explaining all of this to me,” she said. “You can read about it on the Wikileaks website.”

I was about to go to this website when Trump interrupted, “Cody Kessler is a loser. He lost.” Again, with the straight talk. I listened further.

Mr. Trump’s plan to get the Cleveland Browns to become a winning team is to win more games. How come no one else has ever thought of this? I like how specific this guy is about whatzgonnahappen.

This column is sponsored by that thing that offends you.