Week 7 NFL Picks by The Dishwasher Who Trained Paul Ryan

These Week 7 NFL picks have been soaked, scrubbed, and put through the machine. Call me Dishmael. I wash dishes. I am a diva, just like T.O.. I catch flak.

I am an also an idiot savant when when it comes to NFL picks. Okay, only the idiot half of this statement is true. But I have, in fact, foreseen many NFL results in the Jackson Pollock designs of saliva and gravy that my customers leave for me. Nice people! I know you are jealous, as you should be. 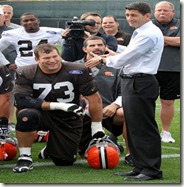 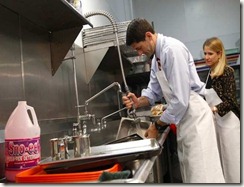 But don’t jump to conclusions. It’s not all art appreciation and collecting money from my bookie. This week, I had to train the Republican vice presidential candidate, Paul Ryan, apparently so he will have something to fall back on if he loses the election.

That’s how the Bain Capital Grill runs. I was forced to train this knucklehead, who might then take my job. On the bright side, the 47 percent of me that feels lazy and entitled was happy to let him do my job. But when he walked in here and started talking about how he admired watching Cleveland Browns starting quarterback Colt McCoy when McCoy was at Oklahoma State, I knew that Paul Ryan was not intelligent enough for the dishwashing profession.

First of all, Colt McCoy is not the Browns starting quarterback. Brandon Weeden is. Secondly, Colt McCoy didn’t go to Oklahoma State. He went to Texas. Brandon Weeden went to Oklahoma State. This mistake is exactly like being asked to wash a spoon, and instead washing a knife. Our sous chef has killed for less than that. He has a backyard graveyard full of dishwashers with wrongly-washed knives stuck in their backs.

This is a tough profession, and I just don’t think Paul Ryan has the chops. It’s not like his other profession, except in one way. I’ve also got a binders full of women; mostly vodka-soaked waitresses.

When he was here, all Paul Ryan did was complain that politics is hard. He called it a contact sport, like the NFL. But just as he said that, the chef stiff-armed him on his way to get another cup of coffee. To get around the concussion rule and the fact that we don’t offer health insurance, our medical staff said Paul Ryan was shaken up on the play.

He was immediately, and controversially, sent to scrub

sheet pans while proclaiming like an evangelist that Brady Quinn, of USC, is the best quarterback in the NFL. Quinn, of course, actually went to Notre Dame, and he is Brady Quinn, not Tom Brady.

Obviously, I hope Paul Ryan wins the vice presidency because sending an incompetent dishwasher into this volatile world could be catastrophic.

If Paul Ryan does become a dishwasher, I bet it’s at some fancy private club where the members dirty the dishes with saliva and gravy not for the sake of art, but to prove that they are job creators. That’s whatzgonnahappen.

SEAHAWKS AT 49ers – I can see the future so well for this game, it’s almost like watching on television. Russell Wilson equals Eric Zeir, and he maybe he peaks at Jeff Blake. Frank Gore is awesome. 49ers 13, Seahawks 6

TITANS AT BILLS – Mario Williams sends a game check to the government and pays off the national debt. But until he starts getting sacks, no one cares. Titans 20, Bills 14

BYE AT FALCONS – The Smoke And Mirrors Coordinator is given a raise.

COWBOYS AT PANTHERS – The Cowboys should easily win this game. I do not trust the Cowboys. Panthers 31, Cowboys 27

RAVENS AT TEXANS – In a fate worse than death, Ray Lewis NFL career could be over. But just in case, there is always steroid meningitis. He was a mere cheerleader on the field this year for a mediocre defense. Off the field, he’s a total majorette. Texans 27, Ravens 24

REDSKINS AT GIANTS – Yes, I am buying the Giants could be the best team in the NFL. RGIII is magical, but Eli Manning is a professional salsa dance promoter. Giants 31, Redskins 23

SAINTS AT BUCCANEERS – I would have thought when Aquib Talib took Adderall, it would have helped him focus on not taking Adderall. Instead, it made Drew Brees job even easier. The Saints defense, however, acts like it’s all been suspended too. Oh wait. Buccaneers 34, Saints 33

PACKERS AT RAMS – The Packers finally heard the weeks-old echo of the starter saying, “Gentleman, start your engines.” Packers 42, Rams 22

CARDINALS AT VIKINGS – It looks close on paper, but this is the Internet. Vikings 27, Cardinals 10

BYE AT DOLPHINS – Tied for first. Tied for last. Like kissing your sister.

BROWNS AT COLTS – Dear Scientists… At 4 pm. last Sunday, did the earth’s rotation reverse itself?  Are pigs flying? Did hell freeze over? Why are the corners of my mouth turned upwards? Please help. I do not understand this feeling. Browns 30, Colts 20

JAGUARS AT RAIDERS – The Raiders almost beat the undefeated Falcons. Meanwhile, the Jaguars are apparently allowed to play in the NFL too. Raiders 35, Jaguars 10

BYE AT CHARGERS – For 24 minutes, 24 spectacular women with 24 gold bottles of champagne offer Philip Rivers 24 wishes, but he gives them all away to some old guy recovering from surgery, because that’s the kind of guy Rivers is. Really, that kind of guy.

JETS AT PATRIOTS – It’s Tebow Time. Tebowing. Tebowie. All of the mania will be back when  Tim Tebow inexplicably, as if a higher power wanted it so, throws three fourth quarter touchdown passes. After the game, Bill Belichick says he’d trade Tom Brady for Tim Tebow in a blessed New York minute. Jets 30, Patriots 28

STEELERS AT BENGALS – Evil at Incompetent. For once, Incompetent wins. Bengals 23, Steelers 20

LIONS AT BEARS – Some games, and some weeks are built for upsets. Not this game, not this week. Bears 31, Lions 17

—
This column is sponsored by New York Yankee commemorative brooms.
—