Week 9 NFL Picks; A Midterm Ode To Manning Versus Brady

They told him, Don’t ever come around here
Don’t want to see your face, you better disappear
– Michael Jackson

These Week 9 NFL Picks vote for the Peyton Manning versus Tom Brady rivalry for an Oscar, a Tony, a Grammy, an Emmy, and because we are Browns fans, a Bernie.

We’d vote for both of them for Congress in every race if we could. They sure could quarterback this country, huh? We think Putin would freak if he heard Manning yelling, “Omaha!” 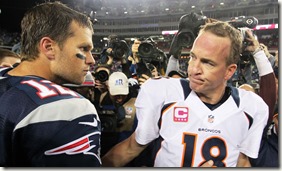 By we, I mean the shadow corporation backing the LLC that operates the non-profit overseas partnership that controls this website. What’s Gonna Happen is like a cross between the Mafia and the Koch Brothers – a mere barometer of the times we live in. That election on Tuesday? It’s ours.

We have been accused of trying to rig this midterm election. We are not trying.

But our hearts are pure when we bring you this message on the rivalry of Manning versus Brady.

The rivalry spans three teams, two men, and one conference. As the century turned, the rivalry was born, unknowingly to everyone but the script writer and, perhaps, the actors. It has been theatrical, musical; lyrical, and mythical.

Manning versus Brady. You wish your team was part of this.

Let’s say, for some reason, you were a Cleveland Browns fan. Why would we wish this on you? Our hearts are pure…. pure evil.

Yeah, so let’s say you were cursed with rooting for the Cleveland Browns with a quarterback carousel more than twenty names long while Brady and Manning have been the gold standard of a rivalry for more than a decade. If that were the case, you would wish your team was part of this.

Brady versus Manning, both playing great at a midway point of the season is how a rivalry gets to win a Bernie so early every year. Sure, this stuff is rigged. You know it, and we know it. Just don’t tell anyone.

See, we know who wins every election anywhere. The president of your local garden club? That’s us. The vice president of Mrs. Stevens 3rd grade class in Peoria? Us too. We did it the same way we backed all the candidates that will win in Tuesday’s election. We backed them with a campaign strategy of manilla envelopes stuffed with unmarked cash, as this is a foolproof way to make sure you get to say whatzgonnahappen.

JETS AT CHIEFS – These are the Jets of Malaysia Airlines. Chiefs 32, Jets 13

CHARGERS AT DOLPHINS – The Dolphins are playing really well, and the Chargers are traveling across the country. Add it up and you can see why I failed at math. Chargers 24, Dolphins 19

REDSKINS AT VIKINGS – Rusty and average RGIII returns to the Redskins, not as a savior for anything other than Colt McCoy’s career. Vikings 17, Redskins 9

JAGUARS AT BENGALS – Blake Bortles suddenly looks a quarterback from an unknown school who got drafted way too high. Bengals 34, Jaguars 14

EAGLES AT TEXANS – It turns out that Nick Foles is falling back to earth. This week, he is pushed to the Earth by JJ Watt. Texans 24, Eagles 21

RAMS AT 49ers – Austin Davis was a fairy tale, but Halloween is over. No more wearing that Cinderella costume. 49ers 30, Rams 14

BRONCOS AT PATRIOTS – Windy and crummy New England weather should mean that Peyton’s ducks get caught by the likes of Darelle Revis. Patriots 29, Broncos 20

RAVENS AT STEELERS – An intriguing game as the Steelers can’t figure out if they are awesome or awful. Call this an awkward win. Steelers 13, Ravens 12

COLTS AT GIANTS – During Halloween, the kid dressed as Ben Roethlisberger scared the daylights out of Indianapolis residents. The kid dressed as Eli Manning didn’t scare anyone. Colts 26, Giants 17

BYE AT FALCONS – The Falcons are winning in the first half, but then the Bye rallies with three quick touchdowns and the Falcons lose again.

BYE AT BILLS – Sammy Watkins practices running all the way into the end zone. Then he practices finishing his lunch.

BYE AT BEARS – Jay Cutler hails a cab to the wrong destination.

BYE AT LIONS – All new factory parts have been installed in Megatron.

BYE AT PACKERS – To the tune of Aretha Franklin’s “Respect,” Aaron Rodgers releases the song “Relax”.

BYE AT TITANS – Ken Whisenhunt has a great plan to run an NFL team, if only he could remember where he put it.

This column is sponsored by a little league fastball from 1998.