Boo! This Halloween, we’ve gone nuclear. These Week 8 NFL picks are dressed as an October surprise. No, not a Cleveland Browns win. This isn’t fiction.

I am sending you this top secret confidential email that I expect neither the FBI nor the Russians to read because I am concerned that Wikileaks may have a transcript of my very lucrative speech to the Cleveland Browns when I recommended taking a quarterback with the number 22 pick in the first round of every NFL draft.

At the time of my speech, the Clinton Foundation was doing charitable work for the saddest fan base on Earth. And we do good work. Look what we’ve done for Cubs and Indians fans. But, not all of it is successful although it all is pretty damn lucrative.

Anyway, I’d obviously prefer that some transcripts of my speeches, like when I spoke about why Gus Bradley is a great coach, don’t get out there. I’m all about keeping secrets. I have a public face, a private face, and a game face. That’s how I roll.

So don’t worry, this email will never make the news. I’m very careful. Just ask my IT guy, Vladimir. He’s the bare-chested guy on the horse. 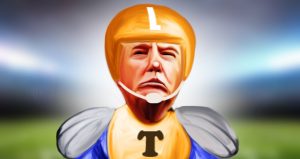 This Halloween, as the orange-helmeted among you do the easy thing and dress as my orange-haired opponent, I’d like to remind you that election day really is trick or treat.

Only there’s no treat. It’s a giant trick. You might even say it’s like turning a trick.

The other costume I considered before settling on an October surprise was dressing as America on the day after the 2016 presidential election. But the muskets were sold out.

Of course, this is all between you and me, and not the Russians or the FBI.

So please, whatever you do, keep this email as secret as the Browns formula for winning. No one has ever seen that.

And while no one apparently ever will see the Browns plan for winning, it has come to my attention that some of my emails in the past may have been hacked and then sent, wrapped in a red Russian bow, to Donald Trump. That, I believe, is what has happened with the Browns winning formula. It has been stolen by the Russians.

That’s why I fear this election may be rigged, unless it isn’t, which I also fear. One of those is whatzgonnahappen.