These 2014 NFL Season Picks are in denial about the 2013 NFL standings, which I burned in dirty coal that had been soaked in radioactive oil just to prove that I don’t believe in any of your stupid facts.

That’s right, I laugh at your so-called 2013 final NFL standings. I understand biased facts when I see them. While these are the best 2014 NFL predictions anywhere, they are not grounded in any facts. Facts schmacts, I say.

As I say it, I am wearing 10-cent blinders that I purchased for a dollar at a Flying J Truckstop somewhere near Pittsburgh, and I have hired a professional consultant to hit me repeatedly on my forehead with a rusty hammer. Ouch! This is the Google-search recommended method to clearly see the future of the 2014 NFL season by ignoring the 2013 NFL season as a reference point. Ouch! Google is always right. Unlike facts. Or science. 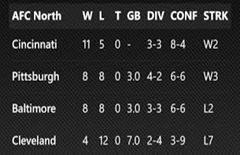 Scientists know as much about science as the 2013 NFL standings know about quality football. Scientists don’t know anything. Everyone knows that. And NFL standings? Please! Facts aren’t factual if you don’t want them to be.

These particular 2014 NFL predictions do not start out wrapped in any quote-unquote facts. It is a fact that the 2013 NFL standings are a complete fabrication, and I can prove it. Last year, the Cleveland Browns were the best team in the NFL. You can look it up. I wrote about it here all of last year.

The NFL standings just picked and chose the information they wanted to use – like wins and losses – and then tried to prove a point by stacking the argument with this hand-picked data. This is simply impossible to trust.

And If there is debate, well who really knows what to believe? I mean, there’s so many people out there just making up crap. It’s pathetic.

I cannot argue with one thing. I do see climate change coming in the NFL. I suggest that the 2014 NFL standings will much better understand and be able to reach a reasonable con

sensus that the Cleveland Browns, led by the comic book icon named Johnny Football, are about to set the NFL on fire and, well, as he texted me, “wreck this league.”

These are all facts told to me by the homeless guy who now makes decisions for the Cleveland Browns. The debate is over. Climate change in the NFL is here to stay, so says this word-processed analysis – and this is clearly a sentence that uses the words “process” and “analysis”, so you know this is essentially indisputable science. There is now absolute consensus that NFL climate change is upon us, and if you argue with me it is clear that you don’t even care about future of the world, you selfish bastard.

Still, you can’t deny that this is whatzgonnahappen.

EAST
PATRIOTS – As best as Bill Belichick knows, none of his current players has murdered anyone. Tom Brady burns calendars in his fireplace, named “Dorian Gray.” If Gronk stays healthy, somehow, watch out. And don’t forget about Revis Island. 14-2
JETS – Geno Smith’s clipboard-holding technique is sure to be studied for decades. Michael Vick, meanwhile, is really good until he is again broken in half, making dogs everywhere feel a bid of schadenfreude  Then Smith comes in to lose the last five games. 10-6
DOLPHINS – South Flori-duh is such great home for the dysfunctional bully factory that is the Miami Dolphins. Ryan Downthehill has a ceiling of Andy Dalton, and he’s nowhere near that. Justin Bieber somehow is a story in the Dolphins locker room. Bieber facts are always believable. 6-10
BILLS – Sammy Watkins is needed to be OJ Simpson at wide receiver. Not the OJ you are thinking of. The one I remember who played Hall of Fame football and defined the Buffalo Bills. Watkins may be that good, but probably not. On this year’s team with that quarterback and no owner, we’ll never know. 3-13

NORTH
BROWNS – Brian Hoyer is undefeated and perfect in the first eight games of the season. Then a homeless guy tells Jimmy Haslam to tell Mike Pettine to play Johnny Manziel, who leads them to their first Super Bowl win. Homeless guy wins executive of the year. 16-0
BENGALS – Andy Dalton and AJ Green set NFL records during the regular season, and then when the playoffs begin, they take well-deserved vacation. 10-6
RAVENS – The first lesson CJ Mosely gets is on a limo ride with Ray Lewis to a knife store. Ray Rice rides along. Joe Flacco works on his post-career speech about the one Super Bowl he won. 7-9
STEELERS  – Hacked by a Browns fan from Russia (Hi Dmitry!) the Terrible Towel Factory spits out only white towels, forcing Steelers fans learn to wave white flags. Well that and the fact that Mike Tomlin and Ben Roethlisberger quit taking Zumba together 4-12

SOUTH
COLTS – Andrew Luck knows that his 15-year chief NFL rival, Johnny Manziel, has just arrived. Luck and Manziel. Just like Manning and Brady, Frazier and Ali. Yeah, Luck is that good, right on par with Johnny Manziel. 13-3
TEXANS – This could be one of the most feared defenses ever, but more likely Jadeveon Clowney saves himself for his second contract. Either way, Harvard’s Ryan Fitzpatrick is quarterback, making a low ceiling and another high draft pick. 6-10
TITANS – Ken Whisenhunt gets drunk with his dog, Elvis, and fondly recalls in a sad twangy ballad of verse and whiskey, how he ended up with his hopes in Tennessee riding on Jake Locker. He hopes to play at a Holiday Inn, as good as it gets for the Titans this year. 6-10
JAGUARS – A redesign of helmet mid-season is a Shad Kahn Flying Mustache on the side. Blake Bortles, never playing a down, develops a second career as a mime. Look, he is in a box. London is calling the Jaguars. So is “draft another quarterback.” 3-13

WEST
BRONCOS – While Aquib Talib and Wes Welker take turns telling Bill Belichick jokes, Peyton Manning tries to trademark the word “choke.” But he’s too busy throwing touchdowns until the playoffs. 12-4
CHIEFS – Alex Smith changes his name to Rodney Dangerfield. 11-5
RAIDERS – Derek Carr and Matt Schaub are not Daryl Lamonica and Ken Stabler, because that would be cool. But as the old guy fades and the young guy grows, they are average – meaning great for a recent Raider QB. 8-8
CHARGERS – After a fantastic season, Philip Rivers has diminishing skills. Just like that, San Diego has to start looking. 5-11

EAST
GIANTS – It is a Giants year to be almost great. First, they will be horrible and then, with Tom Coughlin about to be fired, it turns around. You know how the movie goes. Late season run gives them momentum until they run into Johnny Manziel on the biggest stage. 10-6
REDSKINS – Robert Griffin III and DeSean Jackson set pinball records for the first few weeks of the season. But then Griffin breaks in half again. And Kirk Cousins plays like your cousin. 9-7
EAGLES – Chip Kelly tossed aside his best player, to a division rival. Nick Foles is pretty awesome, but he needs more help. Kelly’s brain doesn’t play receiver, or does it? 8-8
COWBOYS – Jerry Jones watches more Browns games with Johnny Manziel than he watches Cowboys games with Tony Romo, who stinks and then gets hurt. On the day before Thanksgiving, Jones moves to Cleveland to work in an Applebees so he can serve Johnny Manizel. But no, no regrets at all. Brandon Weeden starts the last eight games. 3-12

NORTH
LIONS – Blowing up the coaching staff and starting over again is going to benefit this team as much as recalling a GM vehicle helps. So we’ll see. I blindly trust Detroit, you know, because of that Eminem commercial a few years back. 12-4
PACKERS – Aaron Rodgers is a great insurance salesman. Too bad he didn’t buy any for his teammates. 10-6
VIKINGS – Teddy Bridgewater wants to be the best quarterback Adrian Peterson ever played with. It’s good to have goals. 6-10
BEARS – Mark Trestman and Jay Cutler open a restaurant called “Not-Ditka’s.” 3-13

SOUTH
FALCONS – Julio Jones almost wins the MVP. And then Matt Ryan gets a chance to be bad in the playoffs. That’s what’s called Atlanta-good. 11-5
SAINTS – Okay, Sean Payton is a genius. And yes, Drew Brees is fantastic. But Jimmy Graham is not not happy and Who Dat has turned into Hey. Do You Remember Dat? 8-8
PANTHERS – Cam Newton decides that he likes Spiderman more than Superman. No, wait, make that Batman. And that’s why he has a bad season. Indecisive in the pocket. 6-10
BUCANEERS – Josh McCown huh? Okay, sure Lovie. This is a tanking season for Marcus Mariota. 2-14

WEST
CARDINALS – Carson Palmer has the best year of his career. Bruce Arians finds a rhythm and Larry Fitzgerald plays like Larry Fitzgerald. 10-6
49ERS – Jim Harbaugh and Colin Kaepernick join the Royal Order of Chipmunks and then argue about the secret lodge handshake. It ruins the season. Or maybe it was Kaepernick’s contract or Harbaugh’s Harbaughian ways that ruins the season. That’s right, I made up the word “Harbaughian”. You got a problem with that? 8-8
SEAHAWKS – Richard Sherman knows that you’ve been talking about him. Don’t talk about him! Russell Wilson wears his jersey everywhere. Pete Carroll becomes a craft brewer – “Pete’s Schlock Ale”. Football? What’s that? 7-9
RAMS – Sam Bradford wishes he was as good as Robert Griffin III or Johnny Manziel, or even himself when he played a few good games. Michael Sam’s boyfriend leads the league in sacks. 5-11

This column is sponsored by Josh Gordon’s Bong.