These 2012 NFL season picks are the result of a banging-my-head-against-the-wall concussion I got after the NFL announced it’s Violence Austerity Program.

I imagine someone at ESPN was watching me slam my bumpy, dumb head against the wall and gleefully shouted, “Jacked up!” The head-on-wall hits made me into a Cleveland Browns dynasty-clairvoyant, which helped me get a Nike sneaker deal. But mostly I did it for your adulation. 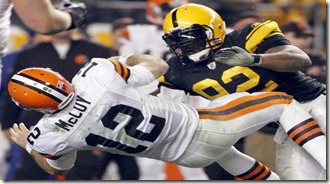 Therefore I am now ready to predict the upcoming bullfighting season, I mean the NFL. Sure, my mental health is a laughing matter. But the struggle of my football heroes is not. And yet, how did they get to become my football heroes?  It’s no small moral dilemma.

It turns out that the official NFL name is the Violence Austerity Program In Denial (VAPID), which is sort of like AA, only it involves a 16-step program that closely resembles an NFL season. There are sincere attempts to cut back entitlement programs such as head-on-head collisions, and heroic quick returns from injuries, but there is also pushback. Street demonstrations are expected on James Harrison’s street.

Yet here I am with pinwheel eyes ready to predict this season in the NFL because I want stimulus, not austerity. Heck, I don’t even know what I am talking about. It’s all Greek to me.

I want to take a community college class in Tebowing so I can justify the simplistic explanation that bounty money was the root of all evil for the New Orleans Saints. I liked the loveable save-the-hurricane-infested-city Saints a whole lot more than the evil take-out-the-head Saints, even though they both have the same funny name – Saints.

Jacked up! Jacked up motherfucker!

Sorry about that. It’s the first time I’ve ever cursed in this column. Ever since I hurt my head by voluntarily banging it against a wall, I can’t control what I say. I again apologize plus I announce that I plan to sue the wall, or the maker of the wall, or maybe you.

I get so confused about right and wrong. I love the NFL. It is my Sunday religion. That’s how I know about the Saints.  But I hear a bell ringing in my head and I don’t think it’s a church bell. It’s my own interior bell, and it has been rung.

So for now and now only, I am a clairvoyant with future plausible deniability and a nasty desire to hit you upside the head with another Browns-dynasty version of whatzgonnahappen.

EAST
PATRIOTS – Famous video director Bill Belichick videotapes an NFL Network special about how the Saints broke NFL rules. 13-3
BILLS  – There are four words Mario Williams will hate to hear, “Bruce Smith used to.” 8-8
JETS – Rex Ryan calls Tim Tebow a bleeping bleep, and Tebow replies that he’s excited to be cussed at by one of God’s creations. 6-10
DOLPHINS  – Ryan Downthehill is the 2012 version of Blame Gabbert. So how about Matt Barkley next year? 3-13

NORTH
BROWNS – West Coast offense? Not really. Power football on the shores of Lake Erie. It’s innovation the old fashioned way. 16-0
BENGALS – I’ll explain my pick this way. I like Kool-Aid. 11-5
RAVENS – Ray Lewis’ cause of death is listed as “Pissed off for greatness.” Joe Flacco practices for a  career in public relations by claiming he is new and improved.  9-7
STEELERS  – Ben Roethlisberger stays in one erratic piece, but the path to long-term mediocrity is clear. 6-10

SOUTH
TEXANS – Arian Foster reminds me of O.J. Simpson, and I mean that in a good football way as opposed to, well, you know. 12-4
TITANS – Jake Locker will be severely average, like his team, and like his high-paid running back. 8-8
COLTS – Andrew Luck may not be as good as Peyton Manning, but he will be better than Curtis Painter. 6-11
JAGUARS – Blame Gabbert will be sacked 160 times. Every pass he throws all season will theoretically be aimed towards Justin Blackmon. 1-15

WEST
RAIDERS – Baby. Win. Just. It may be backwards now, but it will finally begin working with a sound defense, a prepared quarterback, and a running game. 10-6
CHARGERS – Norv Turner has a new book out, “Dare To Be Adequate.” 9-7
BRONCOS – Peyton Manning won’t last the season. John Elway considers his own comeback. 8-8
CHIEFS – Brady Quinn and Peyton Hillis argue over a mirror. Romeo Crennell deserves better. 4-12

EAST
COWBOYS – The Cowboys look loaded. But Rob Ryan wins more beauty contests than the Cowboys win playoff games. 11-5
GIANTS – Eli Manning, with less talent, will ultimately end up having a better career than his brother. Not in the regular season, but in the playoffs. 11-5
EAGLES – Michael Vick again lasts about half a season and he is mostly brilliant. Mad karma backed off the dream team this year, but Vick’s fragile body doesn’t care. 5-11
REDSKINS – Robert Griffin III wishes he was a Cleveland Brown. Halfway through the season, so do his teammates who say to each other under their breath, “Hey Cousin.” 3-13

NORTH
LIONS – Ndamukong Suh watches interviews with forgetful Jim McMahon every day for inspiration. 12-4
PACKERS – The Packers are still trying to understand how other teams would want to win the Super Bowl too when it is supposed to be theirs. 11-5
BEARS – Jay Cutler sues a roller coaster for intellectual property copyright infringement. 8-8
VIKINGS – The theme song of the year is “Nowhere Man” by the Beatles, or maybe “LA Woman” by the Doors. 2-14

SOUTH
FALCONS – Matt Ryan, aka Matty Ice, should have the nickname Matty Eh-whatever. The Falcons are pretty good too. Eh, whatever. 11-5
SAINTS – So the Saints ain’t saints,  coaches and players are suspended, and mad karma ain’t nice. But Drew Brees is a spectacular NFL quarterback and that means a lot. 10-6
PANTHERS – Cam Newton wants to be a superhero. He is already a superstar, the one we’ve long been expecting to reinvent the most important position in sports. 8-8
BUCANEERS – The Buccaneers had a great offseason. Yeah Buccaneers! They are a good offseason team. 4-12

WEST
49ERS – Alex Smith looked like he got a brain transplant last year. This year he gets new weapons. 12-4
CARDINALS – Larry Fitzgerald and Michael Floyd are the weapons. Kevin Kolb is the triggerman due for a career year, or the end of his career. 8-8
SEAHAWKS – Matt Flynn expects to set franchise records in every start. Pete Carroll explains, “You’re not even the starter.” 6-10
RAMS – Sam Bradford simply needs to survive two more years until all the draft picks arrive. 4-12 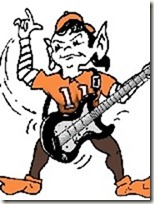 This column is sponsored by the tuxedo hoodie.

Please check out my new ebook, Conquering The North Face with Hap Klopp, the founder of the iconic brand, The North Face. Thanks!