Week 16 NFL Picks In A Letter To Santa

Dear Santa, you cookie-stealing hippie. These week 16 NFL picks are my wish list, along with peace on Earth, and a Cleveland Browns Super Bowl championship.

You’re not going to visit again this year, are you? Tell the truth, for once, you chimney-climbing, commune-living hobo. 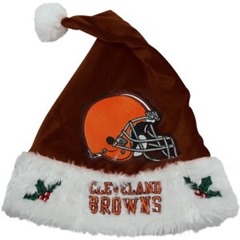 Look, dude. Can I call you dude? Okay, Nick, listen. Every year, I ask for the same thing: that the Cleveland Browns win the Super Bowl, and… wait, it just occurred to me. You don’t even know where I live, do you?

Once again I’ve been nice all year, when I could have / should have  been naughty as hell. It made no difference at all to you, did it? You call yourself, Santa Claus. If I didn’t know better, I’d swear somebody made you up.

But I’ve seen you. At the mall, or riding in a parade, always acting all jollier than thou. You don’t fool me with your talk about how you visit everyone. I’ll grant you that you get good PR, and the perception sells. The red suit was a brilliant branding idea.

But I know how you operate, you breaking-and-entering wizard wannabe. You like the rich kids better. Patriots fans, Broncos fans, 49ers fans, and Seahawks fans are all on your route, aren’t they? Admit it, you even bring presents  to Steelers fans. What kind of saint are you?

Look dude… Yeah, I just called you dude. What are you going to do about it? Not give me a present? Look at me. See that look on my face. It’s not surprise. In fact, it’s bone-marrow sadness. The point is, you don’t understand the effects of decades of ignoring me.

Oh, you do understand.

Well then. If you happen to show up early to my house this year, you are invited for dinner. I am serving venison.

That reminds me. In case you do actually visit, Mr. Claus, sir, I’d like a necktie made out of bacon, and I want a printer that prints warm chocolate chip cookies whenever I say that’s whatzgonnahappen.

DOLPHINS AT BILLS – Are the Dolphins the kind of team that could beat a shaky New England team, and then lose to Buffalo? Yes, they appear to be exactly that kind of team. Bills 24, Dolphins 20

SAINTS AT PANTHERS – This game should be in London because it features the changing of the guard. Panthers 31, Saints 21

COWBOYS AT REDSKINS – This game came without batteries, dice, or a warranty. Redskins 30, Cowboys 29.

BEARS AT EAGLES – Jay Cutler earns $20 million a year because of how he plays this one Sunday in December. Bears 45, Eagles 24

BROWNS AT JETS – The Cleveland Browns had a chance to draft Geno Smith. Smith gets revenge by throwing four interceptions and fumbling twice. The Browns throw to Josh Gordon on every play. That was my suggestion. Browns 13, Jets 9

COLTS AT CHIEFS – The Colts are not grown up enough for this game. There will be better luck next year. Chiefs 27, Colts 20

BRONCOS AT TEXANS – When the NSA data-mines this game, all audience members are labeled as sadomasochists. Broncos 40, Texans 3

TITANS AT JAGUARS – The Jaguars have almost clinched the title of best horrible NFL team in 2013. Jaguars 24, Titans 20

CARDINALS AT SEAHAWKS – The Cardinals can prove to the world that they are real. That won’t happen. Seahawks 24, Cardinals 14

GIANTS AT LIONS – Eli Manning spends all day on Saturday as a mall Santa, as practice for giving the ball away on Sunday. Lions 27, Giants 17

STEELERS AT PACKERS – For Christmas, I want the Steelers to lose. I never get what I want for Christmas. Steelers 20, Packers 17

PATRIOTS AT RAVENS – The Patriots spent weeks living on the lucky bounce / lucky referee tightrope, until they finally fell off for a week. This week, Belichick designs another lucky genius win.  Patriots 24, Ravens 23

FALCONS AT 49ers – This is a preview of the NFC championship from my dreams in August. Time flies like a turtle when you are are wrong. 49ers 31, Falcons 14