Don’t you want me?
You know I don’t believe you
When you say you don’t need me
– The Human League

In this locker room, when I brag about my week 6 NFL Picks, I am just trying to impress my new campaign manager, Bill Cosby. 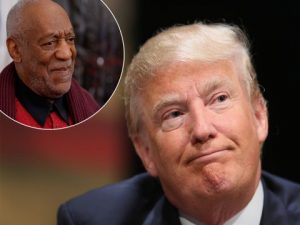 Bill Cosby and I both know how to coordinate an offense, believe me.

Don’t believe the media who lie, lie, lie – using my exact words. The media will attack you, slander you, and seek to destroy you with facts in the same way that they slander the 0-5 Cleveland Browns for being a losing team.

These people are vicious liars and they work for Hillary Clinton, or the Pittsburgh Steelers, or the devil – probably all three. I would like to put anyone who thinks that the Cleveland Browns are a bad football team in jail. The way I read the Constitution, it says I am allowed to do just that.

Bill Cosby told me that my assaulting your intelligence by predicting the Browns would beat the New England Patriots last week would work just fine if I then denied that I made such a prediction.

Picking the Browns to beat the Patriots last week… that was just locker room talk.

This week when Tom Brady was asked about me, he showed class by walking out of his press conference. I don’t have that in me. Not class or restraint.

If you ask me about anything, I will attack you and call you names. That’s my thing. It’s what I do.

This column is sponsored by Vladimir Putin’s “I Voted” sticker.