I am a flake leading the snowflake movement. We have NFL Divisional pick rallies featuring harsh rhetoric and blowhard wind. But don’t blame us when snowmen go bad.

Snowflakes, as you know, influence the NFL. Before and during the playoffs we hold conventions, known by the technical types as clouds, and we decide where to fall.

We hate domed stadiums and we especially hate the Minnesota Vikings for signing Brett Favre. We hate the Detroit Lions, Buffalo Bills and Cleveland Browns too. But remember that those teams play on Lake Erie; the Bermuda triangle of the North. And yes, the triangle pays us a royalty so, in fact, we collaborate.

We hate a lot of things. But we love mittens. And mittens rhyme with kittens. So go on, try to argue with that logic. Yeah, that’s right – snow is righteous because of our logic so if you argue you’ll find yourself shoveling out. See? See? It’s all from the prophecies of a really old book, so it must be absolutely true because… well, because that book is so old.

But now it is the playoffs and it’s time for this flake to pick NFL Divisional games. First, we wonder should we fall on any games at all? To us, it’s an existential question until it becomes one of logistics.  Sometimes, it’s hard to rally the flakes.

We’ve had to outsource to China. It’s embarrassing, but only to us flakes. For instance, 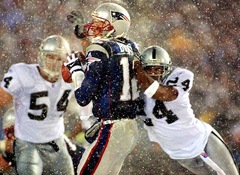 on January 19, 2002 most of the snow falling in New England came from China. That’s right, Bob Kraft brought in Chinese snow for the tuck rule game. We actually created the tuck rule. Shh. Few people outside of the everyone in the media have ever heard this before.

This year, we flakes are thinking of causing a fumble unless we can find a new rule to help the Patriots win. We’re scouring the rule book because we are snow and we like New England. Fist bump! Yeah, that’s whatzgonnahappen.

RAVENS AT STEELERS – This is my own private playoff hell – a game between two teams spawned by the gridiron Satan. While Ben Roethlisberger and Ray Lewis are football’s Lucifer twins, the game itself is full of fire and brimstone. So when Ray Lewis comes down with fatal gout,  Ed Reed plays as if he has extra feet, just like he was taught by Rex Ryan. But it’s the other safety, the shampoo pitchman, who makes the biggest play of the game. Steelers 20, Ravens 17

PACKERS AT FALCONS – As much as I thought I’d pick the Packers, my Watergate source tells me that BC will sweep the NFC. Therefore yes, you already know whatzgonnahappen in the next game down. Listen, I know people who know people and those people told my people that these playoffs like most of sports history for the past few years will revolve around Boston athletes. Matt Ryan went to Boston College. Aaron Rodgers didn’t. That clinches it. That and Michael Turner. Falcons 31, Packers 28

SEAHAWKS AT BEARS – Matt Hasselbeck went to Boston College. Jay Cutler cannot spell “college.” The Seahawks are now on a epic roll and Marshawn Lynch has clinched his place as an NFL films folk hero. I could watch replays of his run last week 50 times in a row and never get bored. So yes, I am pumped and jacked about Seahawks and their college coach, Pete Carroll, who used to coach in Boston so that’s more of that New England karma that seems to be everywhere in sports these days. Seahawks 27, Bears 21

JETS AT PATRIOTS – In the first quarter, Rex Ryan scores on power sweep. On the next series, Bill Belichick takes a screen pass from Tom Brady and goes all the way. Rex Ryan was right. This game is all about Ryan versus Belichick. In fact, the Jets performance in the game is a reminder to the NFL world that one coach is an actual football genius while the other had a reality TV show. Patriots 30, Jets 20

BYE AT BROWNS – Browns fans celebrate that they haven’t lost in the playoffs in years.

This column is sponsored by United Hobos of America.