I can kill time with anyone. Yep, just killing and chilling. Time that is. It’s only a matter of time until I am back in the NFL catching touchdowns. Sure, it won’t be for the Patriots anymore. They’re too “right thing to do” for me. 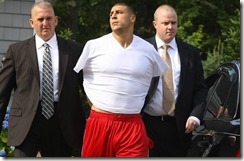 But when I hold the Super Bowl Trophy aloft for the Baltimore Ravens and then join Ray Lewis in the broadcast booth, you’ll see that the predictions I am about to give you for week 1 in the NFL are killer. It’s like I put a bullet right into the target of these NFL predictions and then threw them into a lake or something.

Sure I’m in jail now, but it’s not bad. I know people who are Cleveland Browns fans. That’s cruel and unusual punishment.

The judge offered me a choice of jail or being a Browns fan. I chose jail.

But now I am having second thoughts… about a lot of things, actually. And I think I could have dealt with being a Browns fan this year. Heck, I would have even been willing to be an actual Cleveland Brown because Brandon Weeden is about to have an MVP year, and because that would mean I wasn’t in jail.

But back to the Browns quarterback. Yes, I played with Tom Brady, and I say that Brandon Weeden is better. Of course you can trust me. I always tell the truth.

I am so excited for this NFL season. I have never been more worked up. Well, maybe once or allegedly twice. But you know what I’m saying. I’ve even become a Browns fan because, heck, orange is the new black.

So as we approach week 1 of the NFL season, my lawyer tells me that this is whatzgonnahappen.

PATRIOTS AT BILLS – The name “Tim Tebow” is like catnip to TV announcers, so shut the sound off unless you hate yourself. While the Bills remind the Patriots that their defense isn’t very good, Tom Brady reminds the world that he is Tom Brady. And Danny Amendola now believes he is a Hall of Fame caliber receiver. You know, like Wes Welker. Patriots 40, Bills 20

BUCCANEERS AT JETS – Rex Ryan coaches the entire game in a bathing suit sitting in a lounge chair, just like Joe Namath in the classic poolside photo. Buccaneers 24, Jets 13

FALCONS AT SAINTS – Although the Falcons will prove to be the better team, the return of Sean Payton will be an emotional boost no other team could overcome in week 1. But it’s a long season. Saints 28, Falcons 25

SEAHAWKS AT PANTHERS – The Seahawks feel way overrated, and the Panthers are underrated, according to the United States Department of Weights and Measures. Panthers 25, Seahawks 22

DOLPHINS AT BROWNS – The 1972 Dolphins finally got to visit the White House, which is why a game against the Dolphins is such nice way for the 2013 Cleveland Browns to begin their perfect season. Browns 41, Dolphins 17

VIKINGS AT LIONS – These are two of the weirder teams in football, identified with a star offensive player that is not a quarterback. Too bad. They could both use a better quarterback. Vikings 24, Lions 23

RAIDERS AT COLTS – I want to be the first to ask the question this year: Who is better, Peyton Manning or Andrew Luck? Colts 27, Raiders 21

GIANTS AT COWBOYS – Every other year is a good Giants year, which means they start out slow. And Tony Romo is Mr. September, or at least not Mr. December. Cowboys 24, Giants 21

EAGLES AT REDSKINS – I don’t trust Chip Kelly’s new offense at all, but I like a team with a healthy Michael Vick at the beginning of the season. He can’t last, any more than the shooting star known as RGIII will survive. Eagles 24, Redskins 21

This column is sponsored by the Alex Rodriguez Honesty Society.