Well, I’m numb as a statue
I may have to beg, borrow or steal
Some feelings from you
So I can have some feelings too
– Warren Zevon

These week 14 NFL picks, delivered by drone from Amazon, fell like a brick from the New England sky and landed on my head, making me cheer for the Cleveland Browns. I obviously have a concussion. 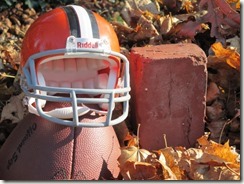 My head hurts. Actually, my brain hurts. Ouch! Did I say, “ouch” already? I can’t remember. Besides my obvious drone-induced concussion, the only other plausible explanation for my cheering for the Cleveland Browns is a curse that goes back decades to what I call “the old country” on a plot of land where tomatoes and children once grew, somewhere east of the Cuyahoga River.

During my time in New England, I have watched Tom Brady play spectacular quarterback every week for the New England Patriots while I have cheered from afar for the likes of Weeden, Charlie Frye, and Brady Quinn, to name three of the worst quarterbacks in NFL history.

There are more many more sad names on the list of Browns quarterbacks in the running for worst quarterback in NFL history. The list is so long and pathetic, it is impossible to get through it without starting to sob.

That’s why I am so optimistic this week when the Browns play the Patriots.

It appears I may get to cheer for a new incompetent, indecisive, inaccurate, noodle-armed (but a nice guy) knucklehead off-the-street quarterback, because that’s the best that Cleveland Browns ever put on the field. In fact, they may start a quarterback they signed off of Youtube. This is not hyperbole

Hyperbole is impossible once you know whatzgonnahappen.

TEXANS AT JAGUARS – This is the NFL version of The Biggest Loser. It’s horrible football, but the NFL is fat and happy and it knows we will watch. Texans 23, Jaguars 20

BROWNS AT PATRIOTS – Whatshisname, the Browns quarterback who last week was a plumber, has by far the best game of his career in his his first and only game in the NFL. Tom Brady says, “Who is that guy?” Thirty years later, Tom Brady says, “And that’s how I hired my plumber.” Browns 100, Patriots 3

VIKINGS AT RAVENS – For the first time this season, the Ravens play as if Ray Lewis was still in the middle of the defense holding a bloody knife. Ravens 24, Vikings 10

BILLS AT BUCCANEERS – Every bit of momentum points to a Buccaneers win. But it’s 5 o’clock somewhere, and it’s any given Sunday in Tampa. Bills 26, Buccaneers 14

DOLPHINS AT STEELERS – After Ryan Tannehill arrives in Pittsburgh inside of a sack, Mike Tomlin throws a brick at Mike Wallace – by mistake. Steelers 22, Dolphins 10

PANTHERS AT SAINTS – Facing an angry Saints team at home is about as good of a test as Cam Newton can get. He passes. Panthers 30, Saints 27

TITANS AT BRONCOS – This is one of those Peyton-films-a-commercial games. Broncos 40, Titans 20

RAMS AT CARDINALS – Can the Arizona Cardinals go to the playoffs? Maybe yes. Cardinals 30, Rams 21

SEAHAWKS AT 49ers – The Seahawks looks unstoppable about now, so of course I think they can be stopped. 49ers 23, Seahawks 17

GIANTS AT CHARGERS – Eli Manning was drafted by the Chargers but didn’t want to play for them. Sometimes, Philip Rivers doesn’t either. Giants 27, Chargers 21

COWBOYS AT BEARS – Check the calendar. Tony Romo is due for a five-interception game. Bears 30, Cowboys 24

This column is sponsored by a very minimum wage.